The Nutcracker Returns to the Warner Theater 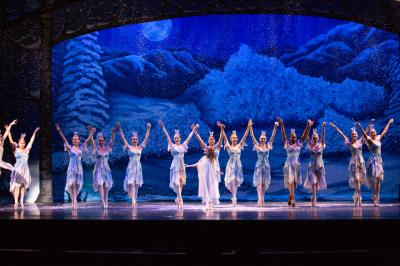 Christine Shewfelt
The snowflake dancers traditionally represent the scene transition from Clara's home to the Land of Sweets. The Nutcracker Reimagined works local Erie landmarks into these traditional scenes.

The Lake Erie Ballet Company's production of The Nutcracker is returning to the Warner Theatre after a two-year hiatus. Erie's Nutcracker Reimagined will feature city history and landmarks as the backdrop of the famous production, bringing a local touch to this classic ballet.

"I'm excited to, once again, direct the reorganized Lake Erie Ballet Company to continue over 60 years of tradition at the Warner Theatre," said Christina Maria, artistic director of the Lake Erie Ballet Company. "This 'reimagined Nutcracker' will not only include the magnificent score in its entirety, but we have used modern ingenuity to include the glorious history and beautiful landmarks of our amazing city on a digital backdrop, enhanced with a script without missing a step of dancing from excellently trained dancers from around the Erie community."

The show features collaboration from a variety of dance schools and companies from around the region, including Corella Productions, Sovereign Ballet, Cadence Dance Ensemble from Collegiate Academy, Marguerite School of Dance, Patterson School of Dance, and features the local talent of Christina Maria, Shawn Clerkin, and Robert Martin. The orchestral score will be performed by the Lake Erie Ballet Company Orchestra under the direction of Jonathan Moser.

Maria began her career training under the famed Russian prima ballerina Natalia Krassovska and learning from the American School of Ballet and the San Francisco Ballet. Her career would lead her to the Boston Ballet, where she would dance and tour across the country before becoming a dancer of the Lake Erie Ballet Company for 14 years. Maria teaches and advises at dancing schools around the region, including as an adjunct faculty member at Gannon University and the Mercyhurst University Dance Department.

Pyotr Ilyich Tchaikovsky's famous ballet, based on the short story The Nutcracker and the Mouse King by E.T.A. Hoffman, premiered on Dec. 17, 1892 in Saint Petersburg, Russia with the original choreography by Marius Petipa and Lev Ivanov. Although the ballet itself was not well-received, critics praised Tchaikovsky's suite. The ballet's first complete performance in the United States was by the San Francisco Ballet in 1944, a decade before the New York City Ballet would have its first annual premiere in 1954 with choreography by George Balanchine.