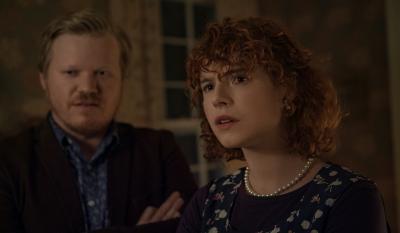 Charlie Kaufman has proved to be a master at depicting both the absurdity and the sheer existential horror of life. As a screenwriter, he had a true talent for taking outlandish ideas and making them achingly relatable, and as a director, he has taken all the longing, confusion, and fear of existence and turned them into complex yet entertaining stories. His newest film I'm Thinking of Ending Things may be his most impenetrable and unsettling yet. He has taken a story that is part family drama, part surrealist horror, and part Broadway musical and has made it all uniquely his own.

The plot follows a young man named Jake (Jesse Plemons) who is taking his girlfriend (Jessie Buckley) out to the country to meet his parents in the middle of a raging snowstorm. During the trip, the young woman begins to have doubts about continuing their relationship which becomes stronger as reality begins to slowly unravel around them.

It's difficult to describe the plot of this film without spoiling the entire thing, but I will say that nothing in the film should be taken completely literally. What starts as a simple story slowly falls deeper and deeper into abstraction to the point where the actual plot is swept away in favor of pure psychological and emotional exploration. In fact, with the possible exception of David Lynch, no filmmaker has used surrealism in mainstream cinema as effectively as Kaufman. In this film he uses it to explore the pain, regret, and disappointment of a life unlived until it all comes crashing down in a beautiful but devastating final sequence. It might just be the most horrifying movie-going experience of the year. — Forest Taylor