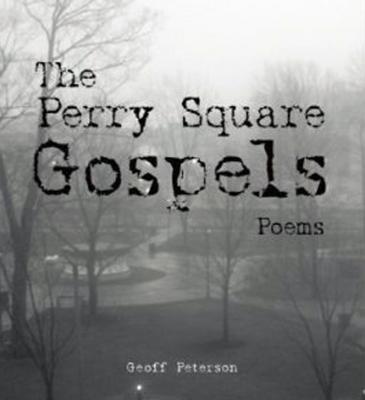 With "The Perry Square Gospels," Geoff Peterson brings his usual concerns for life, relationships, death, and meaning closer to home – in our case, Erie, where Peterson lives when not travelling out west, at The Richford Arms on Perry Square. The photo of our landmark park, Perry Square, the cover of the book, is from Geoff's window.

I know Geoff to be a fellow poet, well-respected in the diverse community of poets who grace our stages or hang out in their writing spaces around Erie. "The Perry Square Gospels" (AuthorHouse, 2012, available from Amazon and Barnes and Noble as well as from our local booksellers) is the remarkably prolific Peterson's twelfth book. This poet and this book are as good a place as any to look further into the poetry part of our literary culture here in the Bay City.

We met across the street from his Richford digs, the downtown Starbucks, at a table behind the north front window, a gray sky outside slowly giving way to an unseasonable sun. Please join us.

Chuck Joy: So Geoff, why do you travel so much?

Geoff Peterson: Remember Pope John Paul? Like him I, or really any other writer, travel to get the hell away. [Laughs.] Also travel provides an opportunity to enter blank spaces, less structured places.

CJ: How did you start writing?

GP: I wrote a story when I was 10 years old, inspired from watching TV dramas with my grandmother, especially one show set in New Orleans. That story was called "The Bartender."

CJ: Please name some writers and artists whose work has inspired you?

CJ: Thanks, man. What has been your experience of Erie?

GP: I was born in Erie, in 1946. I spent half my time in New York City to accommodate my father's pursuit of graduate education but I attended grade school in Erie. I also graduated from high school in Erie. [Looks up at a photograph hung to the wall.] I miss the Gage Hotel.

CJ: How does the future look for Geoff Peterson?

GP: I'm busy helping care for my elderly father. I just celebrated two years together with the poet Megan Collins. I've agreed to appear in your theatrical poetry event "Pure Doctor" at PACA on March 23. I'm plannin' another trip and I expect we'll look at real estate. On all our trips Megan and I look at real estate.

CJ: What about this book, The Perry Square Gospels?

GP: This book, "The Perry Square Gospels," was inspired while I was attending a mass in the chapel at Mercyhurst University. The presence of the lector prompted me to consider the relationship of the sensual and the spiritual, all the pain there. In fact, that woman, the lector, appears in the book, toward the end – let's see, page 87 – the poem, "Liturgy of the Inward."

We stopped there. His Pike and my Zen were almost empty and I was getting worried about a lack of time on my parking meter. I could write more about the content of "The Perry Square Gospels." I could write more about Geoff's noir voice – Geoff's voice is black and white. His voice comes through his lines clearly, a strength for this poet, and live he will knock you out and crack you up.

Geoff writes an awful lot, but he doesn't read very often. His last feature was at the Erie Book Store 915 State St., and any Friday he might show up at Poets' Hall at 1136 East Lake Road. Do yourself a favor – don't miss his next appearance. Watch the listings in the Erie Reader.

I could write about his use of line breaks. Geoff Peterson ends lines in a masterful fashion. His enjambment is fascinating – every line break an adventure. Instead, let me end with that poem, "Liturgy of the Inward." Geoff's characters are vivid too. Here we go:

Her role is to lead the deadbeat faithful
in hymns of praise, but it's the path
her hair takes as it sweeps back
in song, flaxen & straight with bangs
falling, as her voice rises an octave
that we are struck dumb.

Angel of grace,
tracked in contrails of radiance,
the celestial texture of life forms . . .
Nothing's as it seems if you believe –
now write it down.

She opens her eyes to signal our turn
to respond, but my response
falls short of the god on high,
and rivets on the maiden's
outstretched arms, neck & breasts,
all that inspires me and makes me
crazy for life.