An inspirational symbol of Erie's tenacity 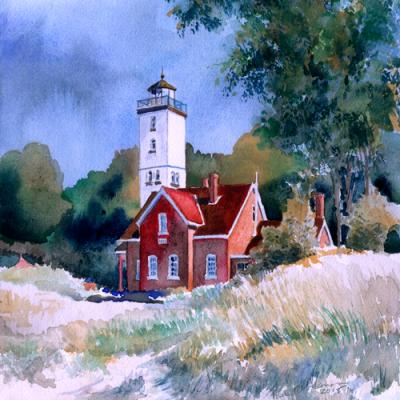 The City of Erie, with its architecture, history, and, of course, Lake Erie, has provided a lot of inspirational fodder for artists and writers. One edifice in this city has long served as a subject for photographers, illustrators, and painters, and has provided thousands of words for articles, books, diaries, and tour maps.

With all of this to its credit, this edifice has also managed to literally guide people and, in many cases, save lives. For 143 years, it has been defying the darkness of night, the storms of the seas, the hard-to-reach skies, and the hardships of the years that have rolled by.

We're talking, of course, about the Presque Isle Lighthouse, shown here in a watercolor painting by James Mann of Coopersburg, Pennsylvania, who created this painting after a trip to Presque Isle while gathering inspiration for his ArtFarm website, jamesmannartfarm.com.

Constructed in 1873, this beacon of safety and source of inspiration, found as part of many illustrations, paintings, signs, logos, stationery, and more, has stood pretty much as it was when first built, except for an increase in the tower height back in 1896. It has become a symbol of the stalwart nature and undying spirit of Erie itself.

Still operated as a working lighthouse by the U.S. Coast Guard, the grounds and building have been leased for a period of 35 years by the Presque Isle Light Station Corporation, a non-profit set up with three goals in mind.

First, the light station will be restored to a historical point dating from 1901 to 1927. This era was chosen as the oldest period where there were substantial photos and a few paintings available to document how it would have looked at the time. One reason there were so many images – in addition to this being a time when photography became easily available to the common person – is that, in the last few years of this period, a road actually ran in front of the lighthouse, between the station and the beach. Traffic was considerable and people stopped constantly to photograph, paint, and illustrate the wonder in front of where they were parked.

Some historic restoration will begin in the spring of 2016, with oversight being provided by the Pennsylvania Historical and Museum Commission (PHMC). Plans call for the replacement of the current metal chain-link fence with a historically accurate wooden fence. Also, the oil shed will be repainted to its original red brick color. The tower will receive some minor repair work in accordance with the historic goals set forth by the board of directors.

The board is set on keeping the lighthouse tower open for tours for as many days as possible in the 2016 season. In 2015, the tower was open for only 30 days and yet had over 5,300 visitors, most of them climbing the 78 stairs to the top for a previously unavailable view of Lake Erie.

Second, the board is set on keeping the lighthouse tower open for tours for as many days as possible in 2016, stretching from Memorial Day through Labor Day. In 2015, the tower was open for only 30 days and yet had over 5,300 visitors, most of them climbing the 78 stairs to the top for a previously unavailable view of Lake Erie. Each group consisted of just 10 climbers and so this made for some long days for volunteers.

The goal, going forward, is to keep the light station open five days a week. This will undoubtedly double or possibly even triple the number of visitors. In addition, the board is looking at ways to open the light station for private and public events.

Third, in order to meet modern safety requirements and provide additional convenience to lighthouse visitors, the board will implement several improvements in the spring of 2016. These will include public restrooms being provided by the Pennsylvania Department of Conservation and Natural Resources (DCNR). Also on the docket for spring will be the construction of an Operation Center, which will house an office, gift shop, and staging area for the tours. Finally, there will be the addition of safety lighting, benches, and new sidewalks.

In order to achieve these three goals, the Presque Isle Light Station is open to memberships, donations, and especially volunteers. More about these opportunities can be found at presqueislelighhouse.org.

In the end, this project is estimated to cost around $2 million, and it is almost certain that this important effort will ensure the future of the Presque Isle Lighthouse as a major source of inspiration for all who witness its beauty and grandeur.

James McQuiston is a local historian, author and musician who has spent 45 years in the publishing field, with several books and articles to his credit. Now retired, he is volunteering his time and expertise as a board member for the Presque Isle Light Station.