Netflix miniseries is certainly one to check out 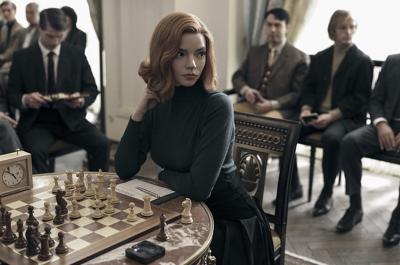 Years ago I was watching a behind-the-scenes about the making of Amadeus, the 1984 Academy Award winner for Best Picture. There is a scene where Mozart's frenemy and rival Salieri takes his musical dictation for the Requiem Mass, the two laboring over the composition of the intricate piece for hours. One of the filmmakers remarked how it seemed crazy to include in the film a scene that is literally just two men engaged in the act of composition, speaking nothing but the language of music between them.

I was thinking of this as I watched Beth Harmon, rendered into life by an exquisite Anya Taylor-Joy, sink opponent after (male) opponent at the chessboard in the new Netflix limited series The Queen's Gambit.

It is a veritable enchantment, by way of both the cast performances and the well-plotted pacing of this coming-of-age story, with its themes of feminism, sexism, addiction and the loneliness of genius, dotted by the miniature wars that play out on the chessboards, as precisely choreographed as any large-scale battle sequence.

The Queen's Gambit was created by Scott Frank and Allan Scott, based on a 1983 novel of the same name, with every one of the seven episodes written and directed by Scott. It opens on Elizabeth Harmon, the daughter of an entirely absent father and a mentally ill math professor mother who takes her own life, landing Beth in an orphanage. Here she makes a friend, Jolene, and first encounters her life's twin obsessions: tranquilizer pills and chess.

The first episode is set mainly in the orphanage and moves forward in time with a confident, assured pace. We see teenage Beth adopted, forming a surprisingly warm and understanding relationship with her new mother, Alma Wheatley (played with sage resignation by an excellent Marielle Heller, director of Can You Ever Forgive Me?). Yet Beth's dependency on tranquilizer pills — plus excessive binge-drinking — deepens, following her ambition to chess tournaments all around the world, where her undeniably prodigal brilliance is stoppered by players of perhaps lesser natural talent but greater erudition, vision, and focus (for example, grown-up Thomas Brodie-Sangster playing a chess cowboy and mentor, Benny Watts).

Yet for all the glossy, sophisticated fashion (the dresses! the hair scarves!), immersive set design, smart dialogue and briskly triumphal expositional scenes of Beth's wins, the most entrancing moments involve steady, settled-in matches between Beth and her opponents, face-to-face, silently speaking the language of elite chess masters, as their hands weave around the board in contradictorily thrilling movements. The power of these well-crafted scenes lies in the soundtrack and Taylor-Joy's expressive eyes, which somehow convey everything an uninformed audience needs to know.

"It's so much more exciting than I imagined," Mrs. Wheatley enthuses after Beth wins a final tournament match.

The Queen's Gambit isn't without its flaws, but Mrs. Wheatley has the right of it: in the tradition of Amadeus, I watched Beth Harmon's genius at work, transfixed, with the same enthusiasm normally reserved for Steelers fans on Sundays.
— Cara Suppa