The Real Witches of Erie

Witchcraft and Paganism not as frightening as they're portrayed to be 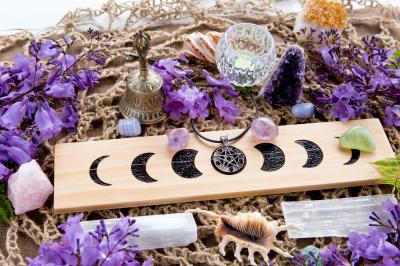 CreativeFire
Belief systems such as Wicca are rooted in Pagan traditions that sometimes predate Christianity by thousands of years. Contrary to popular perception, the overwhelming majority of these movements have no ill or malicious intent, serving instead as an alternative way to become attuned to natural forces and their own spirituality.

As Halloween draws closer, the usual topics come up: the next pumpkin-flavored item, the latest film franchise to be made into a costume, and every so often, someone may mention that the holiday's roots in the Gaelic festival known as Samhain, which served both to mark the end of the harvest season and honor dead ancestors. The concept of Samhain was combined with Christian holy days, and over time, the traditions of wearing costumes and carving pumpkins (originally intended to ward off evil spirits), were incorporated into what we now know as Halloween.

This is nothing new, as the origins of the holiday have been explored through countless documentaries and films. What many may not realize is that Samhain, in addition to many other Pagan holidays that have been westernized, is still celebrated by large groups of people, some of whom are part of the Erie community. While not everyone uses the term "witches" to refer to themselves, it does suit the spirit of the season.

But what comes to mind when a witch is brought up? Bette Midler? The color green? In film and some literature, the witch is most commonly portrayed as a villain, or someone corrupted by a thirst for power. This likely stems from the common misconception that all witches are in league with the Devil. This dates back centuries, long before the events of Salem occurred.

In 1486, Heinrich Kramer, an inquisitor for the Catholic Church wrote the Malleus Maleficarum. Also known as The Hammer of Witches or The Witch Hunter's Bible, this document was meant to instruct how to detect whether someone was a heretic participating in witchcraft, and suggests gruesome torture to elicit a confession. While not the only document of its kind, it is one of the better known, possibly due to Kramer's many unusual beliefs about what witches were like as well as what they did. Kramer himself links the practice of witchcraft with the Devil, stating witchcraft must be real because the Devil is real. Furthermore, it suggests that women are most likely to give in to temptation of the Devil, since they were believed to be the weaker gender. If that was not bad enough, women were believed to spread the word of evil to one another as easily as local gossip, so friends could not chat without being seen as suspicious. Healers and midwives were also brought under suspicion as witches were believed to use herbs and children to do the Devil's bidding. Kramer had been criticized prior to publishing the document for being uncomfortably preoccupied with the more intimate details of an accused heretic's personal life, and it is not hard to detect that through the text. Needless to say, if the clergyman lived in this era, he might have had a very angry blog, and perhaps a body pillow with a cartoon character on it.

Unfortunately, by the time the Malleus Maleficarum was banned by the church, the hysteria had already begun, and Kramer's word was seen as gospel by many. The most young people remember being taught in school is about the Salem Witch Trials, in which 19 people were hung, five died in jail, and one was crushed with stones. The reality is hysteria was running rampant for centuries throughout Europe, and at least 40,000 people were executed for witchcraft. A witch could have been anyone outspoken, independent or different.

While there are practitioners who do associate themselves with the Devil or Satan, that is a completely separate organization that has nothing to do with Paganism or witchcraft as a general practice. Much to the chagrin of the many members of the Erie Pagan/witch community, they cannot explain that witchcraft is a part of their spiritual practice without facing accusations. Margo Wolfe is a local practitioner who has taken part in various conferences and events for people of diverse religious beliefs such as Patheocon and gatherings held by the Sisterhood of Avalon. That being said, she is all too familiar with the misunderstanding that any and all forms of witchcraft are linked to Satanism.

"Satan is a Christian concept, and Paganism is pre-Christian. There was no concept of Satan," she explains. The fact of the matter is witches, Pagans, Wiccans (three things that are not synonymous), are just expressing their spirituality, similar to any other belief system. A local couple who wishes to remain anonymous follows the traditions of Norse Paganism, and they get very disheartened when their practice is assumed to be barbaric or violent. "We worship our gods and we also worship the Earth, because the Earth is sacred. We aren't running around sacrificing people," they say. "We are a different form of a religion; we have people that we look to and pray to."

Another common misconception about witchcraft and Neo-Pagan practices that include it is that it's against Christianity. Wolfe assures, "It's not anti-anything, anti-Christian or anti-God. I know people who are Pagan who also align themselves with Judaism. I know some people who find the teachings of Jesus in their path. It's difficult to nail down on purpose. It's taking hold of one's spirituality." Michelle Dolan has started exploring witchcraft for herself, and strongly encourages research of the topic before reaching any conclusions. "It's just like any other religious belief, it's an actual belief system and not a cult."

For many who found this path on their own, and were not raised that way, Paganism and witchcraft simply spoke to them in a way other religions didn't. Rachel Bernhardt has been a practicing witch for around five years, and follows the Greek pantheon of deities. "I consider myself religious again, which is really weird for me. Christianity had no pull for me my entire life and my whole family is Christian. I never had a true religious experience with Christianity which now I do with my deities." She also clarifies that the purpose of spellwork for her as a witch is not voodoo dolls or mind control the way it has been portrayed in the media. "The intention is never force." Another point she stressed was that these different paths are just as valid as anyone else's. "Once you choose a path it doesn't limit you to believing in only what you do. It's as basic as diversity in people. Not living that person's life doesn't suddenly make it not a real life."

For practitioners who have chosen this path, witchcraft and Paganism has introduced a new form of self care. "I would never have started meditating before getting into witchcraft and that has done so much for me," says Bernhardt. "I'll meditate with the crystals, put on some different frequencies, and it's nice." Dolan adds, "It makes me feel a little safer, protected. When I am doing spells it makes me feel empowered." Wolfe shares this feeling of empowerment, asserting "I've been able to lead and have a voice in my own spiritual path."

That being said, for those who would be interested in looking into Paganism or witchcraft, it is a path anyone can follow. "I've seen people who dress like the soccer mom down the street who are interested in it," says Dolan. "People of all genders, races, backgrounds, people who never fit into any box before." There isn't just one way of practicing either, one of the Norse Pagans who goes by the name Sam states. "I've seen so many people from different races with different pagan beliefs. Everyone has their own different pagan beliefs; unified they have one common goal."

So as the full moon rises on Halloween, realize the concept of witchcraft is not as simple as the classic films make it out to be. Make no mistake, plenty of Pagans and witches enjoy watching Hocus Pocus and Practical Magic, just don't expect the witch next door to bring back the dead or shoot Force lightning from their fingers! That being said, it is comforting to know the world is magical.

Claudia has been fascinated by the concept of witches ever since she was a child, making a quest to consume as much media as possible about them. Of course, she does also come from a long line of Tarot readers…and has a crystal collection. She can be reached at claudia@eriereader.com