An Interview with Patrick Haggerty 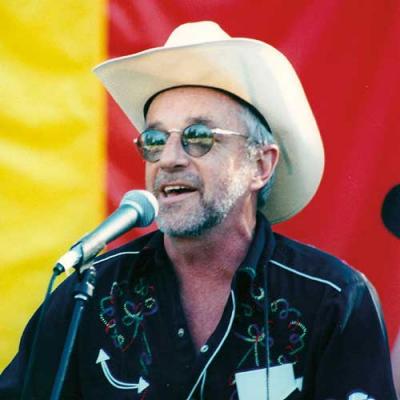 Lavender Country's self-titled album from 1973 is believed to be the first country record to openly explore themes of homosexuality. And frontman Patrick Haggerty wasn't delicate about the subject, either. The record's blunt, R-rated lyrics confront homophobia directly, responding with exasperation, humor, and melancholy to an intolerant era. When I asked about the origins of the album, Haggerty's  response was surprising.

"The early part of the Lesbian and Gay movement was all about public education," according to the singer, who lives in western Washington state with his husband of 28 years. "I know that sounds boring, but it really was! It was very exciting and a fundamental, necessary step – you had to tell people who you were and what you were about. And nobody had any information. We didn't have any information... We were making our own valid information."

Recently, the North Carolina-based indie label Paradise of Bachelors reissued the record, and it's finding a much broader audience than the one that greeted it in the early seventies, but the idea for the album began with "Back in the Closet Again," the band's subversive update on the Gene Autry cowboy classic. It's a strangely multifaceted song. When Haggerty exclaims, "Whoopee ti yi yea/It's sure a bummer being Gay," one might be tempted to dismiss it as an ironic novelty. But the song's celebratory piano and fiddle arrangements transform it into something more substantial and emotional. Haggerty wrote it in response to the intolerance he encountered as an activist: "[It] was about the struggle to be admitted into the anti-war movement – the left, progressive, socialist movement. Because at the time, they had to re-organize their thinking too. We had to fight our way into the antiwar movement and the various movements that were happening at the time. And we weren't necessarily accepted into any of them, though the women's movement was, of course, always a friend."

Though Lavender Country's music was often confrontational, the appeal of the record isn't limited to political agitation. With its laid-back style and careful piano arrangements, it shares many similarities with other "outlaw country" favorites of the seventies, such as Townes Van Zandt or The Flatlanders. Speaking of the latter, Haggerty's voice calls to mind a gentler, more eccentric Jimmie Dale Gilmore, adding sweetness and vulnerability to his punchy tales of sexual alienation. There's plenty of dark humor throughout the album, but there's also sadness, warmth, a touch of psychedelia, and a remarkable sense of urgency.

Haggerty is particularly proud of the communal aspects of the record's production: "The joy that you find in the Lavender Country music was the joy that we were having in the Lesbian and Gay Liberation movement. We were having fun... It's a true community piece, produced by the community... sold by the community to the community, raised from the community, very much so. I could never have made Lavender Country on my own. And that's a really cool aspect to the vintage of the album now." In this spirit, the reissue includes a long, fascinating oral history by Haggerty, which carefully details the album's eccentric history.

As you might imagine, the audience for a gay country record was pretty limited in the wake of Richard Nixon's landslide re-election. Haggerty laughs as he recalls the dismissive responses: "You're either gay or country; you can't be gay country. Even though a ton of sissies came from Nebraska and Idaho and all over the place. Of course there's gay country. Duh... We came from everywhere!" Fortunately attitudes are beginning to change, and the songwriter is impressed with the diverse, enthusiastic response to the reissue: "There's been a paradigm shift in who's interested in Lavender Country. They don't care that it's country. They think that's interesting, kinky and kicky... The line has moved. Any half-baked ignoramus who aspires to not be a bigot would like Lavender Country. That's what happened."