The Road to Presque Isle

A 'monster park' is built. 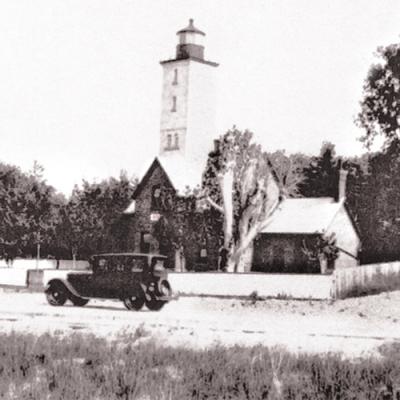 For most of its existence, Presque Isle Peninsula seems to have acted as a protector of Presque Isle Bay and of those who lived at what would become the City of Erie, Pennsylvania – be they Native Americans, French or English soldiers, or American settlers.

In the late 1800s, outposts were built on the peninsula to help protect life out on the open waters of Lake Erie. Presque Isle Lighthouse construction began in 1872 and was finished the following year. The United States Life-Saving Service "District 9" opened a life-saving station at Presque Isle in 1876. Later merging with the Revenue Cutter Service, these two organizations became the U.S. Coast Guard, which now manages the rescue station and oversees the light in the lighthouse tower.

During all those early years of activity on this stretch of sand, there was no road!

Sure, there was a plank walkway from a boathouse on Misery Bay to the lighthouse. There were trails wide enough to allow two draft horses to pull a wagon wherever the terrain would allow. Still, the only typical access to the point of the peninsula was by boat.

In 1908, the City of Erie began building a waterworks on Presque Isle to provide fresh water for the city. Water from Lake Erie was pumped into two reservoirs on the peninsula, where impurities were allowed to settle, removing them from the solution. After treatment, the water flowed into the waterlines of the city. In 1917, a pump house, powered by a steam boiler and engine, was built. This pumped the water from one basin into the other, then across Presque Isle Bay to Erie. This system of supplying drinking water for Erie operated until 1949.

By 1921, Presque Isle was named a Pennsylvania State Park, and by 1924, the first section of pavement was laid. Soon more roadway was built, particularly to the Presque Isle Lighthouse Eventually, over 13 miles of roadway were created, being named Route 832, but more commonly known as Peninsula Drive.

By 1921, Presque Isle was named a Pennsylvania State Park, and by 1924, the first section of pavement was laid. Soon more roadway was built, particularly to the Presque Isle Lighthouse. Eventually, over 13 miles of roadway were created, being named Route 832, but more commonly known as Peninsula Drive.

But nothing happens in a vacuum, not even the road to Presque Isle.

In the Erie Magazine of June 1912 we find an editorial, which begins with the words, "What could be more delightful to the citizens of Erie than a well-made drive around Presque Isle Peninsula?"

The magazine spends the next 1,000 or so words singing the praises of "such a drive in Erie that would easily eclipse any in any other city in America."

This bit of insightful conjecturing proposed a roadway spanning the length of the peninsula, leading to a swing bridge for a return to Erie across the channel. This is not, of course, how it played out but still, it was an inventive idea, and may have been the catalyst for the eventual Peninsula Drive roadway.

In another issue of Erie Magazine, from 1914, a report was made on a Chamber of Commerce dinner held February 26, 1914 at the Lawrence Hotel. As the story states: "The dinner was primarily intended to gather the members together for the purpose of discussing the possibilities of developing the peninsula into a monster park. One particular purpose was to determine sentiment of the people to have the Perry Memorial fund expended on the building of a memorial highway on the peninsula."

The article goes on to say, "from the applause that followed any expression in favor of using the fund for a memorial highway on the peninsula, it would seem as though the general sentiment was in favor of this idea."

Again, this is not exactly the way it happened. It was noted that the funds were not transferable to the construction of a highway; but it was also stated, "the meeting was most successful and made it plainly evident that the members who were present at the dinner are all of the same mind … and not one single speaker but voiced the sentiment of willingness to give and do for Erie."

The article ends: "Everyone who was present on this occasion, who expressed themselves, were greatly pleased and declared that they had enjoyed an evening full of interest, and overflowing with enthusiasm."

From here the enthusiasm spread, spurred by the desire to at least complete a road from the waterworks to the Presque Isle Lighthouse. Originally, this road ran between the lighthouse and the beach, making for a very scenic drive, even to the point of disrupting the solitary lives of the lighthouse keeper and his family, during their last few years of manning the station.

While earlier keepers appear to have complained about the loneliness of the remote light station, then-keeper Andrew Shaw complained, instead, of the opposite problem: too many visitors. By August of 1927, he had had enough of the photographers and visitors at all hours, and he resigned his position. Others, however, were eager to assume the role as keeper. The station was officially manned by a government lighthouse keeper until 1949, at which time the light changed from an oil lamp to an automated electric lamp, and the keeper position was eliminated.

Visitors still crowd the lighthouse during the summer months, thanks to the efforts of the Presque Isle Light Station Board of Directors, who signed a 35-year lease in 2014 to begin keeping the lighthouse open for public tours between Memorial Day and Labor Day each summer. There's more on this at presqueislelighthouse.org.

Today, folks from Erie and from many other states and countries are enjoying the road to Presque Isle – Peninsula Drive – and the "monster park" that was conceived as far back as 1914.

For many years, the peninsula protected the bay and city, and its lighthouse and life-saving stations protected those out on the water. With around four million visitors each year, Presque Isle Peninsula, it seems, continues to protect Erie – this time in an economical, environmental, and enjoyable way.

James McQuiston is a local historian, author and musician who has spent 45 years in the publishing field, with several books and articles to his credit. Now retired, he spends his time writing, playing music, and enjoying Lake Erie.