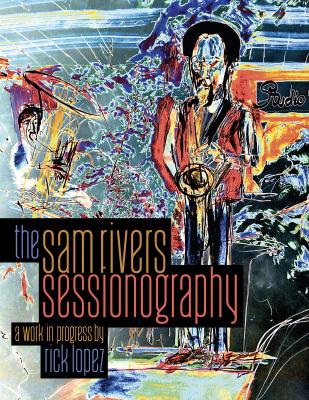 In March of 1997, Rick Lopez began his first and arguably most iconic music research project as an online document, detailing the life and music of jazz musician and composer Sam Rivers. Those 25 years of research, dedication, and compilation culminated in a book that is nothing short of an absolute masterpiece.

Rivers — whom Lopez describes as "the man who has come to define 'deserving wider recognition'" — was born in El Reno, Okla. in 1923, becoming active in the jazz scene in the early 1950s. Most famously known for performing as a tenor saxophonist, he also performed on an array of other instruments, including bass clarinet, piano, and viola, among others.

As Lopez humbly states, he "did not 'write' much of this book. It is an assemblage, an incomplete puzzle, a collage built from the work of others." But in reviewing the staggering 768-page anthology of Rivers' life and sessionography, it is hard not to attribute a great amount of success and credit to Lopez. Compiled within these pages are decades of painstaking research, detail, and passion that cannot be easily found within many other collections.

For Lopez, the work is hugely important: "It's got my fingerprints all over it because the content is personal to me, and because I really don't know how to do anything otherwise." Lopez has dedicated so much time and effort to this work, making many trips and spending countless hours researching and obtaining archival information from folks around the world, including Rivers' daughter Monique and individuals at the RivBea Archive (named for the studio jazz loft Rivers and his wife Bea ran in the 1970s in New York City's NoHo district).

The research was nothing if not fruitful, though. Contained within the collection are nearly 600 images, many from the RivBea Archive, alongside a incredibly detailed and dedicated retelling of Sam Rivers' sessions and life.

In the ending to his preface, Lopez perfectly sums up the passion, dedication, and incredible work poured into this collection, stating, "A single line would be sufficient preface in itself. Mr. Samuel Carthorne Rivers: Here is the shrine that I've built for you. I wish you were here to see it! And I pray that it is worthy."

As of this writing, copies of the book are available via a $65 donation to Lopez's GoFundMe page for the project, which you can find here: gofundme.com/f/sam-rivers-sessionography

Lopez's other works include the 2014 publication The William Parker Sessionography as well as digital sessionographies for Marilyn Crispell, Mary Halvorson, Glenn Spearman, and David S. Ware, which can be viewed on his website at bb10k.com