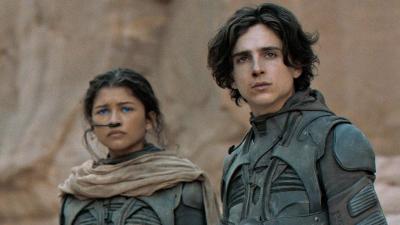 For a supposedly "unfilmable" book, Dune certainly has a lot of film adaptations. We've seen the 1984 film, a Sci-Fi channel mini-series, and even an aborted attempt by surrealist Alejandro Jodorowsky. Now Denis Villeneuve (Arrival, Blade Runner 2049) attempts to bring Frank Herbert's sci-fi epic to the big screen and the result is a massive, ambitious undertaking — too massive to even be contained in one film. It's a decision that will overjoy fans of the novels but may leave other audiences more than a little confused.

Set in the year 10191, we are brought into a space empire centered around a mysterious resource known as The Spice. Responsible for all interstellar travel, it is the most valuable resource in the universe and can only be found on the hostile desert planet of Arrakis. Young Paul Atreides (Timothee Chalamet) comes to the planet after his family is charged with overseeing Spice production. But he soon learns that other forces are at work and that he is at the center of a prophecy that may unite the indigenous people of Arrakis.

From a visual standpoint, the film is absolutely gorgeous. Not since Peter Jackson's The Lord of the Rings has a fantastical literary world been so fully realized on screen. However, the story is so complex that audiences may have trouble keeping up with everything. It also lacks the campy charm of David Lynch's under-appreciated 1984 adaptation. In keeping everything from the book, the film had to be split into two parts, leaving this film basically climax-less. That said, it is a feast of the senses, and hopefully that will be enough to keep audiences invested for the conclusion.