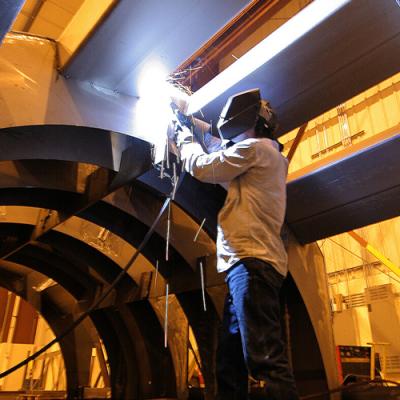 The layoffs announced by GE Transportation are expected to near 1500 by the end of the first quarter of this year, depending on a number of variables including voluntary retirements, changes in the global economy, and technological advancements in the production of the Lawrence Park plant's primary product, locomotives.

But this cycle of boom and bust over the past 30-odd years has wreaked havoc on the collective regional psyche and placed GE Transportation in a light similar to a west Texas oil company or an Appalachian mining enterprise. In such cases, the promise of prosperity makes the tragedy of the bust worth enduring, whether it be fact or fiction.

As a region, we've become obsessed with the status of work at GE Transportation in no small part because it's been the region's largest employer for as long as most people can remember. The prospect of that changing is unsettling at best. However, analysts and regional planners over the past two decades have embraced the notion of diversification, both within and among industries. This means that in addition to building portfolios different from traditional manufacturing, moving into advanced manufacturing sectors, industrial services, and management support, our traditional industries need to diversify their own portfolios in order to remain competitive within their respective sectors.

So the production model of a company like GE Transportation will move from traditional locomotives into technologically advanced locomotives like its Evolution line, as it's done for some time, as well as create other products and services like the locomotive "kits" that will be shipped to assembly plants in locales as different as Fort Worth, Texas and Bihar, India.

"In economic theory, diversification is always better than trying to stand behind a single industry or a few industries or old industries from the past," says Ken Louie, director of the Economic Research Institute of Erie (ERIE) at Penn State Erie, The Behrend College. "We need to continue to grow in diverse ways."

It's that type of diversification that keeps Louie feeling optimistic about Erie's economic future.

"We're still recovering from the recession, so we haven't gotten back all the jobs we've lost, but we've made some modest gains." 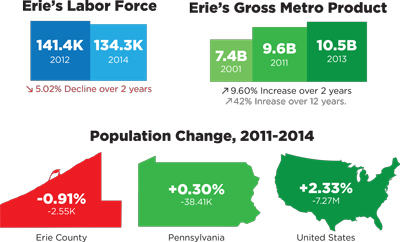 Unemployment has declined in the region during the past few years. As of mid-2015, the Pennsylvania Department of Labor and Industry estimated that unemployment in Erie County fell to 4.9 percent, just slightly higher than statewide unemployment estimated at 4.8 percent. The caveat to declining unemployment rates is our shrinking population. Since 2011, Erie County has lost just under 1 percent of its total population, many of whom were job makers, and as a result the region lost more than 5 percent of its total labor force. In short, fewer jobs and fewer job seekers equaled lower unemployment rates.

It's a bit of a shell game, but over time it's not all bad.

"Long term projections for local industry by the PA Department of Labor are not all that pessimistic," says Louie. "Between 2012-2022, they're projecting employment in all industries to grow by 6.7 percent. That means that overall, employment is going to modestly increase. Furthermore, PNC Bank is forecasting that employment in NWPA is going to grow by 1.7 percent in the next year. Again, these gains are modest, but they're headed in the right direction." 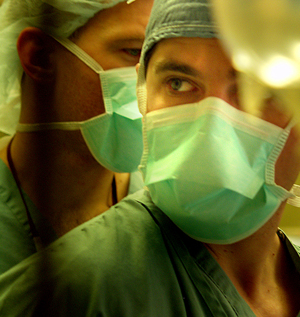 What's harder to comprehend is the changing nature of Erie's industrial profile. Manufacturing was the backbone of the Erie economy for so long that its decline unsettled the labor force as well as those industries that supported manufacturing. Sixty-eight percent of the jobs lost during the last recession were, in fact, lost from manufacturing. As traditional manufacturing declined, employment in healthcare and various service sectors began to replace high-paying manufacturing jobs.

For traditionalists, the bright spot coming out of the 2007-2010 recession was the fact that advanced industries – those focused on investing in research and development within their sectors, and those with significant shares of employees performing STEM knowledge jobs – continued to produce products and wages at rates well beyond traditional manufacturing. In Erie, the advanced workforce earns nearly $69,000 per year on average. Outside of this sector, wages average just $30,000 per year.

Among small metros in the U.S., Erie advanced industries employment falls within the top 25 percent.

And advanced industries jobs are expected to multiply in the next few years, although many of these will be in advanced services rather than advanced manufacturing. The most significant difference between these sectors is that advanced services – such as architecture, engineering, and consulting – tend to employ people with a bachelor's degree or higher, whereas 50 percent of the nation's advanced manufacturing labor force, albeit a highly skilled workforce, have less than a bachelor's degree. 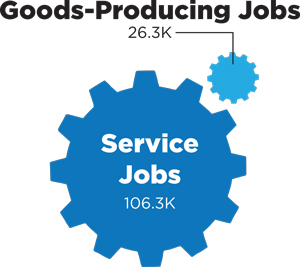 According to Pennsylvania Labor Industry forecasts, traditional manufacturing is expected to grow by less than 2 percent in the next few years. However, service industries are expected to see growth greater than 8 percent.

Advanced services will do even better. That's good news, because traditional service sectors like tourism and comparable industries like retail tend to offer wages well below those in manufacturing, generally, and advanced industries, in particular.

To that end, state analysts expect professional technical services to grow by more than 11 percent and management is expected to see greater than 43 percent growth. Louie says these estimates are historically consistent with ERIE analysis.

"I see that our economy needs to diversify so that the growth areas like architectural consulting and architectural services, in addition to new sectors like computer systems and computer design, which are expected to grow by more than 40 percent, can continue to create new jobs," says Louie.

Wages in these categories tend to be well above the regional median household income of just over $45,000.

Between 2011-2013, Erie's GMP grew by more than 10 percent, according to the U.S. Conference of Mayors, which publishes nationwide data on America's metropolitan regions. Erie's GMP is expected to grow more than 1 percent more in 2016.

"The region is growing," Louie says, "and I think the fact that it's growing rather than contracting is reason for optimism."

Jim Wertz is the co-author, with Perry Wood, of "Erie's Advanced Industries." He can be reached at jWertz@ErieReader.com, and you can follow him on Twitter @jim_wertz.