The True Cost Exposes the Dark Side of "Fast Fashion"

Morgan's well-meaning documentary offers a startling and ambitious glimpse into the most immoral peripheries of our consumer economy. 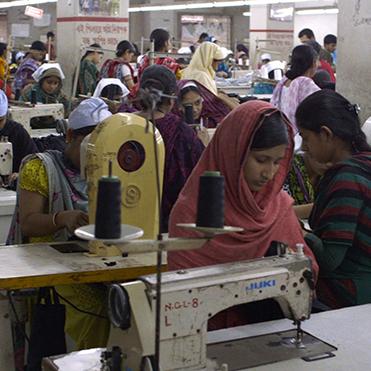 Toward the beginning of Andrew Morgan's 2015 documentary The True Cost, we are introduced to Shima Ahkter, a 23-year-old garment worker in Bangladesh who is trying to organize a labor union. Ahkter makes less than three dollars an hour working in what we would almost certainly call a sweatshop. While trying to support her young daughter, she advocates for the basic improvements necessary to prevent workplace catastrophes like the Rana Plaza disaster – an atrocity that took the lives of over 1,000 Bangladeshi workers in 2013 when a poorly maintained factory collapsed.

The film forces us to confront the ugly consequences of our access to cheap goods through long shots of polluted rivers, glimpses of congested factories, and interviews with exhausted workers.

Ahkter's story exemplifies Morgan's documentary at its best – it takes an easily ignored problem (the astounding inequality often produced by globalization) and gives it a relatable, human face. The film forces us to confront the ugly consequences of our access to cheap goods through long shots of polluted rivers, glimpses of congested factories, and interviews with exhausted workers.

As an investigation into the shady supply chains that produce "fast fashion" for companies like H & M and Forever 21, the film is stirring, powerful, and honest. But its ambitions somewhat exceed its running time. As The True Cost expands its scope – tackling related issues like genetically modified cotton in India, free trade fashion lines in Europe, and the culture of consumerism in the West – it often loses focus.

Morgan's well-meaning documentary offers a startling and ambitious glimpse into the most immoral peripheries of our consumer economy. It doesn't offer clear alternatives to the system we're currently stuck with (or a particularly nuanced assessment of how it came to be), but it will definitely leave you with a strong gut feeling about the wastefulness of the globalized present. – Dan Schank