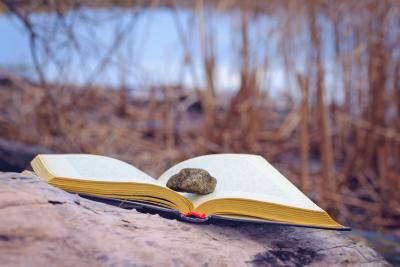 Maxal Tamor
Prominent area poets and non-poets will take turns reading from Edgar Lee Master's *Spoon River Anthology at the Blasco Memorial Library's Hirt Auditorium on Sunday, Jan. 19. The collection of free-verse poems, released in 1915, has been revered for its storytelling and authenticity of voice.

In a remarkable collaboration between the Erie County Poet Laureate and the Public Library, Edgar Lee Master's Spoon River Anthology will partially come to life in a reading in the Hirt Auditorium on January 19.

Written in 1915, Spoon River is a collection of free-verse poems written in the voices of fictional characters who are now dead and spending their eternal rest in a cemetery near the small town they inhabited. The stories they tell — of their lives and how they died — often intertwine and contradict in delightfully dark ways.

The book was a literary sensation in its day, with Pulitzer Prize-winning poet Carl Sandburg writing that "the people whose faces look out from the pages of the book are the people of life itself." Those voices and their stories still resonate today, says 2018-19 Erie County Poet Laureate Chuck Joy. "They are just as 'legible' as they were in 1915."

Those assembling to read selections are as diverse as the fictional characters. Besides the expected poets such as Joy, John Burroughs (Ohio's current Beat Poet Laureate), Mabel Howard, Matt Borczon, Abdullah "Bigg Wash" Washington, Cee Williams (former Erie County Poet Laureate), Duet Poetry, and Christina Riley Brown, other readers are expected, but have not yet been announced.

Even more surprising as readers are County Executive Kathy Dahlkemper and Mayor Joe Schember — neither afraid to balance leadership with a little lyricism.

So, as in the varied lives of Spoon River inhabitants, each reader will bring their personal perspectives to the microphone when representing their characters. They, too are "people of life itself." This will be compelling.