The Wait is Over at Dysmorphia's CD Release Show

Dysmorphia is set to release the follow-up to their 2015 demo "Apathy is Dead," a 13-track, self-titled album, that was three years in the making. 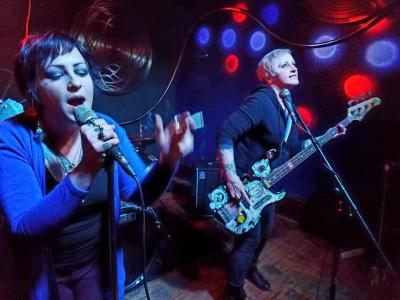 This Friday, the all-female riot-punk outfit Dysmorphia and special guests will grace the stage of Scotty's Martini Lounge for their long-anticipated CD release show. Joining them is a crew of notable bands from both Erie and Pittsburgh, eager to showcase their own work alongside Dysmorphia's new output. Chief among the locals are Aria and the Voiceless, a rock quartet with a twist of punk influence. Making the trip from the South are The Fuckies, an alternative punk rock band notable for their masterful inclusion of the cello, and Middle Children, a Pittsburgh-based electropop act, who released their second and most recent LP, Something Private, in 2016. Last but not least is Elizabeth Kawinski, who will be opening the show with an acoustic performance.

Dysmorphia is set to release the follow-up to their 2015 demo "Apathy is Dead," a 13-track, self-titled album, that was three years in the making. Guests are encouraged to enjoy the bar and support the bands by purchasing merchandise. This show is for folks 21 and over, sponsored by The Radcastle Collective, Rebel Girl Media, and Gimp Guy Underground Promotions. Scotty's notes that underground art will be on display as well. When it comes to diverse gigs headlined by a band at the forefront of progressive, feminist punk rock in Erie, Dysmorphia's album release show is not one you'll want to sleep on. — Aaron Mook