Anyone can see things as they are, but it takes someone special to hope for something more. Rebecca Styn is that special someone. 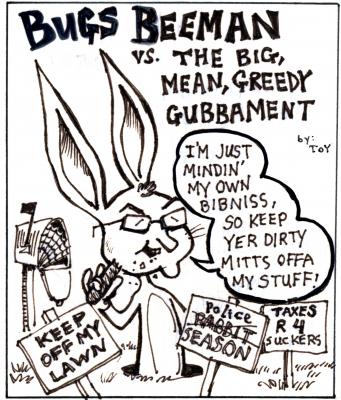 On December 19, TIME Magazine once again introduced its "person" of the year. This honor, awarded annually for the last 85 years, is an accolade given to a select person – or group or thing – that the magazine's editors deem made the greatest impact during that respective year.

This year the honor went to President Barack Obama.

However, this title is not necessarily a tribute. Although many innovators, presidents, leaders, and captains of industry have been awarded this award, some more notorious and malevolent souls have also made this list: Adolf Hitler, the infamous leader of Nazi Germany and father of the Holocaust, received the honor in 1938; and Joseph Stalin, who murdered millions during his reign of the Soviet Union, received it the following year in 1939. There have also been more conceptual choices, such as "the peace-makers" in 1993, the "whistle-blowers" in 2002, and "the protester" in 2011.

So, as I reflect upon the history of this honor, I wonder if it's not time to bestow a similar award – on a smaller scale – to a person – or group or thing – in our fair Gem City that has made a great impact over the last year. This in turn prompts me to take a look back over my columns in 2012.

Throughout the year, many people and events were a target of my musings. I raved about Glenn Beck for his support of the Kanzius Cancer Research Foundation, and promoted County Executive Barry Grossman's introduction of county term limits, I ranted about the polarization of the Republican and Democratic parties, and ridiculed the worst construction project idea ever proposed in Erie – the new McDowell High School. I stirred the pot with the voter suppression efforts of the Pennsylvania Voter ID law. And I briefly touched upon some of the deeper issues affecting our city – the overall poverty increase and the deconstruction of Tent City – while recognizing some of the do-gooder efforts of organizations that combat these issues every day, such as the United Way, Big Brothers Big Sisters, the Erie City Mission, and the YMCA.

As I mull over these highlights, I must admit that initially I am prompted to afford this honor in comic relief fashion and give it to the greatest sideshow Erie's ever seen – in my humble opinion – Ebert Beeman. However, after some thought, I believe given all the sadness and tragedy that's occurred in our nation over the last year – and even more recently the last few weeks – it would be more fitting to recognize something different…and better. Besides, parading Beeman out in such fashion would be just horrible.

So, since I conceptually have the privilege of presenting such an honor this year, I would give it to all of you…the "game-of-life players."

Sometimes I look around and think in this day and age, life gets a little tougher to, well, just live. And at times we should all take a moment to realize that just living can be an amazing and challenging feat. So, this award goes to the many attributes that encompass life – it is for the 'you' who never gives up no matter what happens; the 'you' that may not always see the beauty in life but recognizes it still exists; the 'you' that still believes on some level humans are innately compassionate and good; and the 'you' that although may question your faith or existence, still hopes that something or someone greater exists…

And finally, it is for the 'you' that knows that when situations don't work out the way we so desperately, deeply hoped they would, continues to hold onto some small fabric of hope that they will work out for the better; and no matter how tragic or disheartening life might be,  keeps finding it truly is worth living.

As Agatha Christie once said, "I like living. I have sometimes been wildly, despairingly, acutely miserable, racked with sorrow, but through it all I still know quite certainly that just to be alive is a grand thing."

So, cheers to each of you, my friends, for staying in the game and living. And a toast to a healthy, prosperous, and beautiful 2013.