Now up for discussion: Affordable care, that guy on county council, and voter ID. 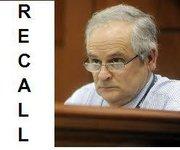 Recently, the U.S. House voted to repeal the Affordable Care Act. On its own, this is really not surprising. Republicans control the House, they oppose President Obama's health reform law, and so they voted to get rid of it. But the group didn't stop there. In fact, to date, they've voted to repeal it 33 times. Holding that vote once makes sense. Republicans had promised that much during the 2010 campaign. But 33 times? If doing the same thing over again and expecting a different result is the definition of insanity, what is doing the same thing 33 times over again the definition of? This information is being provided not because I'm for or against the health plan – that would be a story in and of itself. However, every time the House takes this vote, it's time they could be spending on other issues. And although they've found the time to vote to repeal the Affordable Care Act on 33 separate occasions, they have voted to replace the Affordable Care Act well… never. Think about it.

That Guy on County Council

Is anyone else tired of seeing Ebert Beeman's name in print (except for B. Toy's new comic strip – Just Toyin' Witcha, which recently featured a three-part series on him). But Beeman's back at it again. Although he's been convicted, Beeman believes the law is still on his side and that he has the right to retain his seat on County Council. On the surface, this seems like a no brainer and he should be easily removed. In July, District Attorney Jack Daneri filed a removal request on behalf of Erie County residents. He cited the Pennsylvania Constitution, which states, "no person hereafter convicted of embezzlement of public moneys, bribery, perjury, or other infamous crime, shall be eligible to the General Assembly or capable of holding any office of trust or profit in this Commonwealth." However, Beeman's attorney alleges that an "infamous" crime was not committed and is now forcing a court fight over how much the Pennsylvania Constitution applies to Beeman and whether he could keep his seat. After hearing this, I recalled a column colleague Cory Vaillancourt wrote several months back. As concerned citizens, why didn't we just take action into our own hands? Anyone living in Beeman's district could have started their own coup, and forced his resignation merely by collecting valid signatures from 30 percent of the township residents. Actually, it's a bit more detailed than that – but it would have been very doable. You should all read this article - if for no other reason than to be a more informed citizen.

In my previous column, I talked about the voter ID law being appealed. However, just last week the court decided to ultimately uphold the law. Since my main concern is voter suppression, you should know there's a small caveat within this law – that it doesn't apply to absentee ballots. Registered voters who are unable to make it to the polls due to illness or physical disability or won't be within the county can request one. The application requires applicants to provide a PA driver's license or nondriver's license number, but does not require them to provide copies of either. And if you don't have either you can list the last four digits of your Social Security number, which is then put into a database to verify that you are actually who you say you are. Of course the application requires the applicant to cite a reason for not voting in person and this vote can be challenged. I tell you this because I want you to vote. All of you. I talked about voter suppression in my last article. I don't want to see a decline in voting come November. I challenge you to stop fighting them and instead prove them wrong. I have found the greatest glory comes from those that don't think you can't do something – and yet you do it anyhow and even the smallest battles can be rewarding. Remember, in the end, "whether you think you can or can't – you're right." Find a way to vote.

Love? Hate? Agree? Disagree? I want to hear from you. Email me at rStyn@ErieReader.com