The Way I See It: Flu Shots and Local Elections

Time to take your medicine! 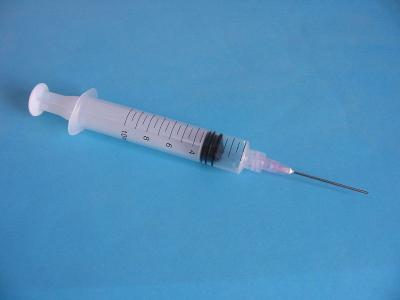 I'm just going to put this out there: I am a hypochondriac. I hate getting sick. Hate it. I don't know anyone that really loves it – hopefully not anyhow – but I do everything in my power to avoid it. I get my flu shot every year. I probably wash my hands a million times a day – okay, maybe hyperbole – and if someone sick is in the office, I ask them to go home – even though I'm not their boss. And I work in the medical field.

So, let's bring it back to this flu shot.

I hope you've noticed somewhere along the way that our country is now near epidemic proportions when it comes to the flu outbreak. Close to home: just this past week, over 400 flu cases have been reported, 43 victims have been admitted to local hospitals, and one death has been attributed to the flu.

Statewide, 22 deaths have been attributed to flu cases that have been reported. And this is just a small number in comparison to what is occurring across the country. In addition, locally, all signs indicate that flu season hasn't peaked yet. So, with that, I feel this is as good of time as any to tell you: go get your flu shot.

"People should absolutely still get a vaccine. There is no way to know how long this flu season will last," says Charlotte Berringer, director of nursing for the Erie County Health Department. "Just because it started early doesn't mean it will end early. It could very well go through the spring season. If you haven't received it, you can still get it – but remember, it will take two weeks to be fully immunized."

Although getting the flu shot doesn't protect you 100 percent, according to Berringer it is still the strongest weapon in the arsenal. "Yes, you can still get [the flu] – and it's possible you could catch a different strain that isn't protected, but we've seen very little activity outside of this particular strain."

As for getting the flu from the flu shot? "It is absolutely impossible to get the flu from the injection," Berringer says. "The injection is a dead virus. The nasal vaccine, however, has a small amount of the live virus in it and it is possible you could experience some respiratory side effects from the spray. But not from the vaccine."

But the reasons to get a shot go far beyond your personal self-interest. By getting a shot, you will safeguard those who need the protection the most: people who have certain medical conditions – including asthma, diabetes, and chronic lung disease – pregnant women, and individuals 65 years and older.

It's also important to get the vaccine if you spend time around anyone in these high-risk groups or are around babies younger than 6 months because they are too young to get the vaccine. Besides, the more folks who get vaccinated, the more difficult it becomes for the flu to continue to spread.

In other unrelated news, announcements for local government officials have started to filter out. While this is an off year for national elections, our local slate could possibly see some major changes. Erie County Executive Barry Grossman and Erie Mayor Joseph Sinnott are both up for re-election. And although nobody has stepped up to run against either, there's still time.

In addition, City Council has some competition. Council members David Brennan, Curtis Jones, Jr., John Evans, and council President Jim Winarski are all up for re-election this year. Evans was appointed to the seat back in June and intends to run in this primary. He is the only Republican currently on the ballot.

Brennan will officially announce this Thursday; Jones has already announced he intends to run and Winarski has stated that he is strongly considering it. In addition, two other faces will appear on the ballot.

This past week, Selena King announced her bid amongst friends and supporters at the Erie Maritime Museum. This is her first time running for office.
Julie Ann Calipo, after an unsuccessful bid in 2011, plans to run again.

In addition to council, other high-profile open seats for 2013, include: Judge of the Court of Common Pleas, Sheriff, Clerk of Records, and County Council seats, which include districts 2, 4 and 6.

Interested in running for office? You still have time. The first day to file petitions isn't until Feb. 19 and runs through March 12 to turn them in. For more information, check out voter page on the Erie County Government website at www.eriecountygov.org.

Love? Hate? Agree? Disagree? I want to hear from you. Email me at rStyn@ErieReader.com, and follow me on Twitter at @rStyn.