The Way I See It: The Book of James?

Gauging the "LeBron Effect" and what the all-star's return to his hometown truly means. 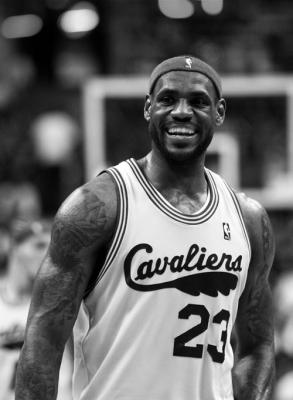 Two-time NBA-champ and Akron-native LeBron James returns to the Cleveland Cavaliers, the team that first drafted him, after a four-year stint with the Miami Heat.

What was seemingly the biggest event to occur since the resurrection of the Lord and Savior Jesus Christ [at least according the Wall Street Journal, which ran a cover story with a headline reading "Cleveland Cheers the Second Coming of LeBron James," showcasing with it a photo of a man carrying "The King has Returned" sign just below it], on Friday, July 11, LeBron James announced his return to his once beloved – and hometown – team: Cleveland Cavaliers.

LeBron announced this decision through an essay he penned himself, on the Sports Illustrated website, allowing an opportunity to break the news to the public uninterrupted. He spoke of his decision to leave and his reasoning behind it, but more interesting, he explained his reasons for coming home – ones less focused on championships and more on creating a greater impact to the people of Ohio.

To say Cleveland fans rejoiced is an understatement. Fans took to Twitter with hashtags such as #thekingisback and #welcomehome. Others carried LeBron signs, wearing No.23 jerseys or other LeBron related gear and strolled the mobbed city streets. And even though he slighted the team and the city in free agency four years ago – few, if any, seemed to hold a grudge.

And this is just the emotional impact.

Since LeBron announced, "I'm coming back to Cleveland," economists everywhere started drawing up numbers on the economic impact he may have on the city. A Cleveland-area professor, LeRoy Brooks, drew up a plan suggesting that the "LeBron effect" could add $500 million annually to the local economy, while Cuyahoga County Executive Ed Fitzgerald offered up a more modest number of only $50 million [a man who is also now running for Governor].

Brooks believes more fans will flock to the arena to see James play, more staff will need to be hired to handle larger crowds, and more money will be spent during games at local bars and restaurants – in essence all feeding into the local economy, which is, simply put, in the gutter.

Cleveland's unemployment rate is at a staggering 8.5 percent; poverty levels are more than double the national average; and there's a bleeding job market and a rapidly declining school system.

To Brooks' and Fitzgerland's points, LeBron did write that he was not only coming back to play basketball, but to help make a difference to the community he grew up in.

But can one individual truly create this level of impact?

To start with, Cleveland fans are diehard individuals. They stay loyal no matter the outcome of the situation – even when players leave. They didn't stop going to Cavs games simply because LeBron left. Hell, Cleveland fans have continued to watch their beloved Browns turn over and die every Sunday and still show up believing that miracles can happen [I know this, because I am a fan and have been since the Bernie Kosar days. And I stayed one even when they were gone. I've watched our team leave and go to Baltimore to become the Ravens and suffered while those very same individuals won a Super Bowl in another city.

And I don't even live in Cleveland.]

So, although they experienced a great loss with the departure of LeBron in 2010 – and while ticket sales and prices did drop – the Cavs still drew 17,000 fans a game during the 2014 season.

They also didn't stop spending money just because The King took his talents to Miami. One estimate suggests that Cleveland's "leisure economy" lost $48 million in the aftermath of his departure. But if the fans start spending money on the Cavs now, it most likely won't be new money but rather funds they were spending elsewhere. Yes, some will travel from outside Cleveland to see a game now – but it remains doubtful that this will create immense financial gain and make great strides for the city economically.

The fact that the return of LeBron was likened to the resurrection of Jesus Christ speaks to even a sadder state of affairs. Unfortunately, more often than not, we as individuals place athletes on high pedestals. We worship at their altars and rejoice when they choose to build their temples in our cities. And in making them holy, we expect miraculous and immediate results from them.

But when these athletes fail – or leave – we in turn crucify them as if they've promised us eternal life and then simply begin searching for our next savior.

LeBron will be the first to say he isn't God-like in any respect. And he's not out proclaiming himself to be a savior – rather, it is the media – with headlines like that one in WSJ – that ascend him to this level. And while he may have given hope to a city looking for something to cheer about, perhaps we should stop short of heralding his [most recent] written word as holy gospel.

After all, he is only human – and merely one mortal man.