The Whig Convention of 1840 in Erie 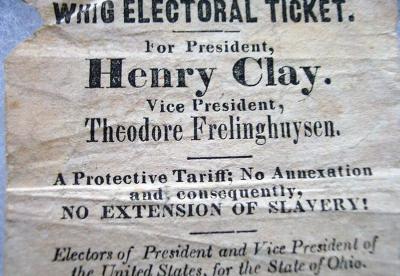 Erie, Pa. might be the smallest city in the U.S. to host a national political convention. In 1840, the recently organized (1833) Whig Party, the successor to the nation's original political party, the Federalists, brought their climactic national meeting to this relatively small shipping port and early American industrial community.

The main reason for selecting Erie was the fact that the U.S. fleet of the Battle of Lake Erie, commanded by Oliver Hazard Perry, had been built in Erie and was its homeport. On September 10, 1813, Perry defeated the British fleet at Put-in-Bay near Toledo, Ohio, and had sent notice of his victory to his commander, Gen. William Henry Harrison, with the now-famous words, "We have met the enemy, and they are ours."

The Whigs had actually formally nominated Harrison at their meeting in Harrisburg in December 1839, and in the following months held mass meetings in Baltimore, Columbus, Ohio, and other cities, but the event in Erie was the concluding spectacle in the Whig presidential campaign process, a process which really had little or no precedent then at the beginnings of modern American party politics.

Gen. Harrison, also the hero at the battle of Tippecanoe (for which he was nicknamed), was the overwhelming favorite of the Whigs, and the connection between him and the famous victories of the War of 1812 was an advantage in the upcoming 1840 presidential election. This was clear from the series of Whig rallies and mass meetings that took place across the country from mid-1839 through the summer of 1840.

On September 10, 1840, according to published historical accounts, huge crowds assembled on a square bounded by Front, Second, Holland, and German streets in Erie. In the days before, crowds had emerged from the steamer ship docks, and the roads to Erie were choked with wagons and ox carts, Whig partisans walked on foot and rode on horseback from all over the region and nation. The event in Erie had been widely publicized for weeks.

The day of the convention, led by Chief Marshall General Dick of Meadville, the Buffalo (NY) "Flying Artillery" and an infantry company wearing bearskin shako headgear, thousands marched up State Street to the rhythms of martial band music, according to accounts reported in "50 Years of Progress --- Serving Erieland." A giant portrait of George Washington was carried aloft with thousands of small flags, and campaign songs were sung by all, adding extraordinary color and festive sounds to the giant parade. Later in the day, near Cascade Street, the Whigs met with speeches and considerable hoop-la and festivity, confirming the nomination of Gen. Harrison and his running mate John Tyler. The slogan "Tippecanoe and Tyler, Too!" has come down in U.S. history as one of the first and most memorable campaign slogans. It was part of a popular Whig campaign song sung frequently at the Erie convention.

Interestingly, the Democrats held their Erie convention the same day at the foot of Cascade Street, a few block from the Whig convention. They were supporting President Martin Van Buren, but their crowds were smaller. Some very prominent national Democrats did attend, however; perhaps most notable among them was James Buchanan, the only Pennsylvanian ever to be elected president (in 1856).

As it turned out, Gen. Harrison won the November election, but on the frigid inauguration day, March 4, 1841, he decided not to wear an overcoat while delivering his very long inaugural address at the Capitol in Washington, D.C. and caught a cold. This soon developed into pneumonia, and President Harrison died only 31 days later. The campaign slogan thus became eerily true, and Vice President Tyler became president.

This was not early Erie's only brush with the early American presidency. Nine years later, the next elected Whig president, Zachary Taylor, was touring the country, following his inauguration, and planned a triumphal visit to Erie, including a large parade. However, the presidential party stopped in Waterford, just south of Erie, because the president had been stricken ill. He was soon moved to Erie to the home of Dr. W.M. Woods at the northwest corner of Eighth and State streets. "Over the next 10 days, the president was treated by Dr. Woods, and Erie became the temporary governmental seat of the nation," according to John Miller's "A Twentieth Century History of Erie County, PA." Vice President Millard Fillmore was called to Erie from Buffalo, to be at President Taylor's bedside. "Old Rough and Ready" (also a veteran of the War of 1812 and a hero of the Mexican War of 1845) survived, and departed Erie by boat to Buffalo to a 21-gun salute fired by the U.S.S. Michigan (later the U.S.S. Wolverine), the U.S. Navy's legendary first iron-hulled gunboat that had been built in Erie in 1843. In a macabre accident, one gun misfired, killing seven sailors. Less than a year later, following a blistering hot July Fourth celebration in Washington, Taylor developed acute indigestion and died five days later (only the second U.S. president to die in office).

Erie's (morbid?) connection to 19th century Whig political leaders came next in 1861 when President-Elect Abraham Lincoln (originally a Whig leader in Illinois but now a Republican) stopped in Erie en route to taking the oath of office in Washington. After a celebratory meal and speech at the Erie railroad station, Lincoln departed by train for his appointment with Civil War destiny and political immortality. Lincoln's next visit to Erie was in April 1865 as his funeral train stopped briefly in Erie while the nation and the city mourned his tragic assassination only days before.

The Whig Party ceased to exist by the mid-1850s. There is no record of Andrew Johnson, a Democrat who succeeded Lincoln, ever visiting Erie.