The Wonder Years once again make themselves one of the easier bands to root for. 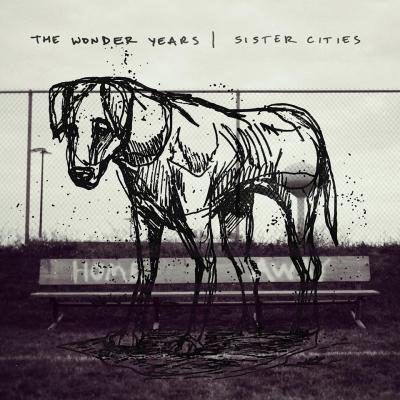 For four albums now, Philadelphia's The Wonder Years have been distancing themselves from the genre that initially gained them hordes of tattooed, gang-vocal loving fans, and on their sixth album, Sister Cities, they seem to have finally shed the pop-punk tag for good. What Sister Cities lacks in The Greatest Generation-sized hooks, it gains in technical ability and lyrical growth. While vocalist Dan Campbell is still singing about grief ("Raining in Kyoto," "The Ghosts of Right Now") and the strain touring puts on his relationships, he's now doing so with tact and confidence. Sister Cities' best moments are the ones that run with this newfound sonic direction. Songs like "It Must Get Lonely" and "Flowers Where Your Face Should Be" depend largely on intricate guitar parts, the latter giving Campbell a chance to flesh out a falsetto singing voice that has only previously been hinted at. On an album that has more in common with Thursday than New Found Glory, The Wonder Years once again make themselves one of the easier bands to root for as they continue to challenge themselves and the genre restraints fans put on them.
— Aaron Mook