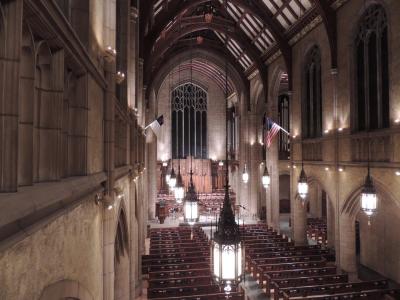 There will be movement(s) at the First Presbyterian Church of the Covenant again, a development that will be a symphony to the ears of classical music fans.

The Bruce Morton Wright Chamber Series will debut within the intimate worship space that was the site of so many mesmerizing Erie Chamber Orchestra (ECO) performances throughout the years. This April, the ECO played its final show after 40 years of supplying free classical music to locals, punctuating the legacy left by former Gannon musical director Dr. Bruce Morton Wright and principal donor Clarence E. Beyers. While the Erie Philharmonic may never be able to fully replicate the ECO (by its own admission), this series is an effort to keep the beauty and grandeur of orchestral performance accessible to all who seek it. There will be a total of eight to 10 free concerts throughout the 2018-19 Philharmonic season, made possible through contributions from Erie Arts & Culture, Scott Enterprises, and key stakeholders.

This show will start out on an upbeat note with Johann Sebastian Bach's Brandenburg Concerto No. 3, a stately composition originally presented to Christian Ludwig, Margrave of Brandenburg-Schwedt (margrave = German nobleman assigned to look after the borders of his corner of the Holy Roman Empire). In Bach fashion, it makes great use of contrapuntal melody and demands virtuosic technical ability from its performers.

Tomaso Albinoni, wealthy paper merchant of Venice, furnishes the second piece of music, the melancholy Adagio in G Minor (or does he? Biographer Remo Giazatto wrote the bulk of it, allegedly from a fragment of an Albinoni draft). Sonically, it feels heavier than 18-point card stock. In contrast, Gioachino Rossini's Sonata for Strings No. 3 in C Major is a 98 brightness sheet of standard copy paper floating in a meadow breeze.

Estonian (and still extant) composer Arvo Pärt's Silouan Song will then move in like a dark cloud. Named for the Russian mystic Father Silouan, the piece is full of pregnant pauses and sustained harmonies, lending an air of solemnity. The radar clears a bit for Edward Elgar's Serenade for Strings, dreamy and wistful like a misty morning in an English garden, bittersweet but not threatening like an F5 funnel cloud.

Capping off the night is Edvard Grieg's Holberg Suite. Originally composed for piano, the suite is comprised of five movements based on 18th century dance forms, drawing heavily from Norwegian folk music. The suite was written in 1884 to celebrate the bicentennial of Dano-Norwegian humanist playwright Ludvig Holberg's birth. It is lively and passionate and should leave the audience feeling energized about having a chamber ensemble back. — Matt Swanseger