A man sits at table. He?s wearing a blindfold, squirming nervously. Two cops shift about the room, thickening the tension with every move they make. Welcome to "The Pillowman." 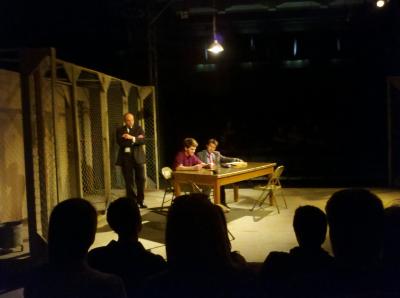 A man sits at table. He's wearing a blindfold, squirming nervously. Two cops shift about the room, thickening the tension with every move they make.

The cop pauses, letting the line hit the audience. The audience pauses. And then lets out a small, self-conscious laugh. After all, we're here to watch a play that largely revolves around the killing of children—not something we should be laughing at, right?

Yet so, "The Pillowman," a Martin McDonagh dark comedy currently on stage at Schuster Theatre—the production Dramashop chose to close its inaugural year with—begins with overpowering suspense and a laugh. The British-style comedy continues throughout the play, bit by bit, but the overwhelming success of the play comes from the actors on stage in this block-box-style production under the keen eye of Director Domenic Del Greco.

Dark in content—the play revolves around the interrogation of Katurian, a young writer whose stories often involve particularly unsettling content, as a recent string of child-murders is sweeping through the totalitarian state. Del Greco remains quite true to the original script, and he brings out the best of his actors, using a tight stage with few props, forcing the audience's focus on the words, the actors, and the movement.

Starring as Katurian, Michael Haas delivers a breakout performance, shifting from polite, timid placation of the police, to angry, violent outbursts with the officers as well as his older brother. Relatively new to the stage, Haas delivers a performance that bears closer resemblance to that of a seasoned theater veteran.

In the roles of officers Tupolski and Ariel, Zach Flock and Matthew Fuchs, take on the traditional good-cop, bad-cop routine but pepper in McDonagh's jokes with delicate and deliberate timing, tearing at an audience that likely wants to laugh but feels uncomfortable by what they're laughing at. But so effective is their acting that we're laughing anyway, regardless of any unsettling feelings. The energy these two bring to the trio that occupies the stage for most of the play fuels the plot, and the interactions between Katurian and Ariel, Ariel and Tupolski, Tupolski and Katurian give the production a quick pacing through the first two acts and a freight-train pace in the third act.

Flock's Tupolski is the driven detective, always looking for answers and logic. With flawless deliver of his monologues—particularly one involving a short story of his own—Flock at times steals the show but does so without hogging the spotlight.

But a most impressive performance comes from Jasse Camacho Vera as Katurian's older brother Michal. Michal, who's described as "slow to get things," is also being held by the police because of the murders. Vera's movements—from hand gestures to facial expressions—capture the audience and demand their attention. The tenderness he brings to the troupe through the delivery of his lines balances the desperation and aggression of the other characters and adds depth to the storyline.

Yes: there's violence. Yes: there's adult language—actually, there's a lot of that. Yes: some of these situations may not be appropriate for all audiences.

But yes: this is an interesting and compelling story and a production worth every penny of the ticket price and every minute of your time because of the great telling of that interesting and compelling story. In what seems to be one quick year, Dramashop has breathed new life into contemporary theater in Erie, and "The Pillowman" is superbly intellectual and entertaining way to witness the closing of one chapter in the hopes of seeing the next one open very soon.

Three performances of "The Pillowman" remain: Thursday, June 14, Friday, June 15, and Saturday, June 16. All performance begin at 8 p.m. at the Schuster Theatre, 620 Sassafras St. For more information on how to reserve tickets, visit: dramashop.org.