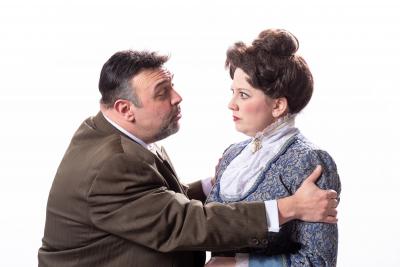 I've always said that during the winter months in N.W Pennsylvania, the best theater productions are either mysteries/thrillers or farces. Gaslight at the Erie Playhouse is not just a thriller, it is THE thriller. It is perhaps one of the best ever written, and has found a team both on stage and behind the scenes that does the fantastic work justice.

The play by Patrick Hamilton debuted in London in 1938, and in no way has it aged poorly. Is it a play that still keeps your attention from curtain rise to fall. It begins in London in 1880, gas lights are still used to keep the darkness at bay. Here we are first introduced to Jack and Bella Manningham. Jack is a less than reputable husband, and Bella is becoming more and more concerned about his activities. The question becomes if Bella has really lost her mind, or if there is something more dubious afoot.

The recent run of Gaslight at the Erie Playhouse was exceptionally crafted. It truly gave the audience the feel of a Victorian home. Scenic and lightning designer Sam Brady and costume designer Ryan Ingram should both be commended for providing the cast and audience and authentic and rich world to be a part of.

The cast was truly exceptional. Chris Bucci, a mainstay of Erie theater gave both a cerebral and charming performance as Sgt. Rough. Daniel Stripp, playing husband Jack both charm and ruthlessness. Teresa Testrake and Hanna Richardson portrayed the two household servants who are night and day in personality, doing great work in every scene they were in. Amanda Hurd played Bella, who may or may not be losing her mind. Her performance was the keystone of the entire production. Amanda had several moments on Friday that made the audience gasp, her final moments of the production being a standard bearer on which to judge quality work for years to come.

Director Carolin Lynn and assistant director Micheal Weiss built a show that runs like clockwork. I also appreciated their choices involving music during the scenes, which is often avoided by many artists in the area. It added to the moments and never felt like it override any of the work being done on stage.

So regardless if Erie is cold, warm, or in between, those who caught Gaslight were in for a treat. Escape for a few hours and remember to breathe. -- JD Mizikowski

by Amy VanScoter10 hours ago
A thought-provoking exploration of love, memory, identity, and illusion