They're Here and They're Clear: Everyone Is Invited to 2019 Erie Pridefest 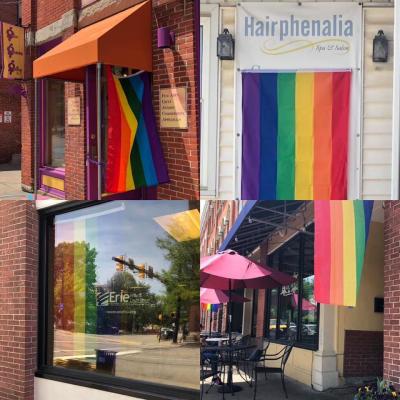 On Friday, June 28, 1969, following what initially seemed like yet another targeted police raid on "the gay bar in the city," the Stonewall Riots broke out in Greenwich Village, NYC. These violent clashes between baton-wielding police and some of the most vulnerable and outcast personages in the city — who nonetheless stood their ground, fed up with centuries of oppression and bigotry — played a large role in ushering in the Gay Liberation and LGBTQ+ movements in the United States.

And this, in case you were unaware, is why we celebrate Pride in June, though the events which mark the celebrations in cities all over the country are now expressions of love, inclusivity, equality, and joy.

"Unlike some of our surrounding cities, we are truly welcoming to everyone that has an open mind and spirit," said Tony "DJ Tony G" Gressley, in his fifth year of hosting Pridefest and his seventh year on the NWPA Pride Alliance board of directors. He added, "Every year, we have grown and this year we are expecting no different."

Erie Insurance has signed on as the title sponsor this year, after the company attained Rainbow-level status in 2018, showing an admirable — and trendy — corporate commitment to the LGBTQ+ community in its home city.

Erie's Pridefest 2019 is set to encompass both the widest space and selection of activities yet offered, with State Street completely closed down between North and South Park Row for the very first time for the event. The annual parade steps off from The Zone Dance Club, on West 18th, at noon, with a joyful — and if previous years are any indication, colorful — march down to Perry Square.

Pridefest proper will then begin around 1 p.m., with food trucks, vendors, informational tables, entertainment, and an all-around celebratory atmosphere with like-minded members of the LGBTQ+ community and allies. "This year will feature what I am calling the Dragathon; I have over 20 performance spots for drag queens and kings confirmed," Gressley enthused. Attendees can also hit up the group Free Mom Hugs for some family-style affection or catch one of the last days of the LGBTQ+ art show at the Erie Art Gallery, two blocks south (its closing reception is on Sunday, Jun. 30)

Gressley stressed the inclusive nature of the event. "Everyone — regardless of skin color, political affiliation, religion, race, creed, sexual orientation, gender identity — is welcome. As long as you don't spew hate, you are welcome here." Even better, none shall be excluded because of age or money — the event is family-friendly and totally free.

The event intends to imbue its participants with "a sense of belonging," according to Gressley. He stressed, "It is important that our queer community feels like they have a place here. And they absolutely do." — Cara Suppa