This is the End, My Friend: Avengers: Endgame is a Long and Satisfying Victory Lap

Spoiler alert: it was a satisfying journey all the same 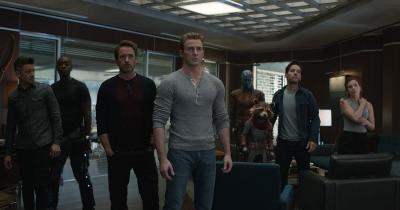 This is the End, My Friend: Avengers: Endgame is a Long and Satisfying Victory Lap

The Marvel films had all been building up to last year's Infinity War, but now one question remains: where do you go after the finale? Fortunately, the new film Avengers: Endgame has some interesting answers to that question, which unfortunately get bogged down in standard spectacle. But it was a satisfying journey all the same.

The film begins immediately after the infamous "snap heard around the universe" and then takes us five years into the future as Earth's Mightiest Heroes come to terms with losing their ultimate battle. However, some unexpected allies reveal to the Avengers that a time loophole may be possible to correct the damage that Thanos has created. The Avengers now find themselves reliving their past adventures in order to save the future.

At a punishing 181 minutes, it could almost be two films in one. The first third is the strongest as we see superheroes dealing with the tragedy of what happens when they don't save the day. The second third, thanks to the power of time travel, almost becomes a greatest hits compilation as the Avengers relive some of their most perilous adventures. Finally, we get an initially exhilarating climax that quickly gets bogged down in endless superhero spectacle punctuated by some truly atrocious editing. The film is at its worst when trying to tell a traditional superhero story but at its best when focusing on the quieter, character-driven moments. It's fitting that after all the chaos and explosions of the finale, we end the film with just characters talking, culminating in what is easily the most perfect final scene of any of these films. Endgame is clunky and uneven but ultimately emotionally resonant, which really makes it the most fitting ending to this entire series. — Forest Taylor