This is Your Life: Tully

Tully is a Dark Character Study Disguised as a Quirky Comedy 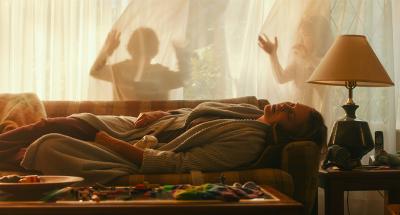 Jason Reitman teams back up with his Juno screenwriter Diablo Cody to give us Tully. Like Juno, Tully is also a look at motherhood but from a very different and, in my opinion, much more interesting perspective.

The film stars Charlize Theron as Marlo, a mother of two (including a special needs son) who just gave birth to a new daughter. Already overwhelmed, Marlo must now endure the crying fits, late night nursing and total loss of sleep that comes with a newborn. As a result, her brother gifts her with a night nanny (Mackenzie Davis) to help take care of the baby while Marlo can get some rest. Hesitant at first, Marlo quickly develops a close bond with the quirky, intelligent and unconventional young woman.

It seems like a typical feel-good story so far, and it is until the film takes an unexpectedly dark turn which I won't spoil here. Then it becomes obvious that Tully is after deeper themes. Ultimately, the film is about the life, decisions and regrets of a woman for whom middle age has suddenly caught up with. Parenthood is an excellent stage in which to present the ultimate anxiety of life: that life is all about the choices we make but also the choices we don't make. The paths we take open up plenty of doors but at the same time they also close doors that can never be opened again. Of course the film is extremely funny but in the end, that dark revelation is what it is ultimately out to show. I think Tully might be best described as a horror film for parents. — Forest Taylor