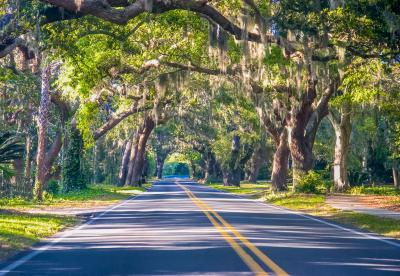 dbvirago
Southern Oak trees line the roadways of the region, helping to elicit a flood of memories and new observations.

I left the hustle and bustle of Erie on Thursday to spend time with my daughter and family in Ohio. Not that I wanted to get away but felt the need for solitude and thought. As you get older, never knowing when it's your time to transition you seem to take time to be retrospective and reflective.

I guess as in Erikson's stages of life, as we reach maturity defined as age 65 until death and labeled by him as reflection or self-actualization. I guess it boils down to two things; how far have you come and what have you done in the process?

On the six-hour trip, I experienced periods of joy, sadness, exhilaration, and shed tears over things past and things present. As I looked back I envisioned my high school days of friendship and study, forming bonds with my classmates and teachers that never would be severed. The many lessons learned from each, the victories, the defeats, the pain, the heartaches all woven into a ball and divinely meshed together to establish my marching orders for life, knowing that the battles would not be short or easy and that life would not present itself as a flowery bed of ease as we began our journey.

I guess you would have to know about the Jim Crow era of the South to understand and appreciate what is forthcoming. Separate but equal was the law of the land, you had a place, stay in it. Your hopes and aspirations were constantly changing as you transversed the bumpy road of Negro life. My dream had always been to attend Georgia Tech and become an engineer but Jim Crow made sure that that dream would not come true. So what did the black youth of my day do when the doors promised to them by the great and sacred Constitution turned a blind eye and a deaf ear. to their dreams and aspirations? I believe Proverbs says that in numbers there is strength so many of us gravitated to the strength and hope that we had and our ancestors died and struggled for, our institutions, Black Colleges, and Universities which now carry the title of Historically Black Colleges and Universities.

Many of my classmates and I migrated to those schools that had nurtured and birthed the great teachers that inspired us, in Georgia, which were Morehouse, Clark, Spelman, Paine, Morris Brown, Albany State, Fort Valley State, and Savannah State. Those who aspired to venture away from home found haven at Florida A&M, South Carolina State, Claflin, Lane, Knoxville, Fisk, and Hampton.

Many of us choose Fort Valley State, searchers and seekers, looking to discover the who, the what, and the why. From the farms of South Georgia, from the metropolitan areas of Georgia's larger cities (Atlanta, Macon, Columbus, Augusta, Decatur, Lagrange), from the ocean sides of Savannah and Brunswick, from the Mountains of North Georgia from the smallest hamlets and towns we came. As workers' bees we scrambled to return to the hive we knew what we had to do. This was not a time to be selfish and put personal goals ahead of the goals of your people. But rather to form together as the sharp point of the arrow to pierce and penetrate, to put a death spiral to all those things that had hindered us as people. So we studied together, we ate together, we cried together; we marched together because the We and the Us are more powerful than the I. We were taught by our great grandparents, who were enslaved, by our grandparents who suffered through the Reconstruction and Jim Crow, and by our parents who knew that freedom, equality, and justice was the fetus been formed in the belly of America and knew that birth was imminent. It was this expectation and this inspiration that inspired my generation not just to fight for but to ensure that America for our children, this coming generation would be different and that the aroma of justice and equality would be smelled and savored by all.

As I begin to get closer to my destination I could see the faces of my classmates both living and dead pose the question to us all, "how did we do". Did we fail, did we encourage, did we sacrifice ourselves for others? As I pondered this question and began to survey my thoughts for a possible answer it seemed as if I was suspended in time. Two things popped into my mind a quote from John Wesley, "Do all the good you can, by all the means you can, in all the ways you can, in all the places you can, at all the times you can, to all the people you can, as long as ever you can" and Hebrews 11:25-28 about Moses, "Choosing to suffer affliction with the people of God than to enjoy the pleasures of sin for a season; Esteeming the reproach of Christ greater riches than the treasures in Egypt: for he had respect unto the recompense of the reward. By faith he forsook Egypt, not fearing the wrath of the king: for he endured, as seeing him who is invisible.

So I parked, turn the engine off but realize that the race is not given to the swift nor the strong but to those who endure to the end. Lord, allow me to not only endure but gain the prize which awaits me.

Johnny Johnson is an author, teacher, and historian. He is one of the founding members of the Harry T. Burleigh Society, has participated in numerous historical programs, and is the author of Erie African Americans in the 1880s.