Three Reasons TV Was Worth Watching in 2016 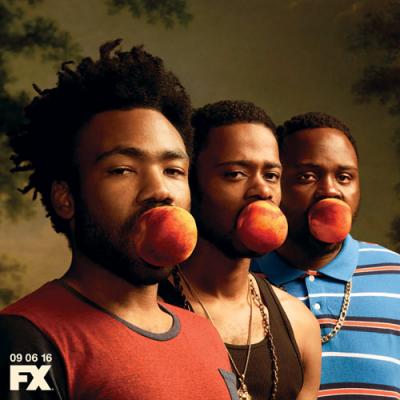 If you were watching television in 2016, you were more likely than ever to see a diverse variety of interesting faces.

African-American life took center stage in multiple ways, ranging from the comic realism of Insecure to the soapy delights of Empire. Female-focused shows expanded dramatically, via the gritty realism of British cop drama Happy Valley, the stoner antics of Broad City, and the feminist outrage of Full Frontal With Samantha Bee. A South African immigrant hosted The Daily Show and Game of Thrones finally cooled down on its rape problem. It was enough to make you forget the election.

People say we're in the midst of a TV renaissance, and they're absolutely right. Accordingly, I won't offer any "best-of-the-year" declarations. Instead, here are three shows that really thrilled me.

Atlanta is as much about boredom as it is about bling. It addresses themes like poverty, race, and incarceration with the same warmth and introspection it affords to a sleepy conversation in a bedroom.

1. Nothing better encapsulates TV's current momentum than FX's Atlanta. In fact, it often feels like an upgrade on shows I already like. A less antagonistic Louie. Masters of None with better acting. Transparent, minus the cast of infuriating narcissists.

But the thing that really grips me about the show is its easy, naturalistic tone. On paper, Atlanta sounds like pure wish fulfillment – a single father (played by real-life rapper Donald Glover) tries to make it as a manager for his cousin, an emcee called "Paper Boi" whose latest mixtape is generating underground cred.

But Atlanta is as much about boredom as it is about bling. It addresses themes like poverty, race, and incarceration with the same warmth and introspection it affords to a sleepy conversation in a bedroom. And its lack of contrivance is pretty unprecedented.

2. Like its spiritual predecessor, AMC's Breaking Bad, FX's The Americans begins with a hokey premise and leans into it with alarming gusto. In the early 1980s, just prior to Gorbachev's perestroika, we follow a typical suburban couple who also happen to be Soviet spies. But instead of 007 theatrics, we get a somber meditation on loyalty, ideology, and family dynamics.

The Americans gets more thrilling with each passing year, as its narrative becomes increasingly claustrophobic. In its fourth and strongest season, almost nothing positive happens to any of its characters. Endearing allies are betrayed, children learn uncomfortable truths, and major characters are executed. But there's no empty sadism. Each tragedy feels complex, meaningful, and surprisingly resonant.

3. If you had told me last December that 2016's biggest revelation would be a five-part ESPN documentary about O.J. Simpson, I'd have never believed you. I willfully ignored the O.J. trial in the 90s. But O.J.: Made in America offers an incredibly detailed look at our criminal justice system, urban crime, race, misogyny, and life in Los Angeles. The stuff you'd expect is there, too – the car chase, the glove, the murder, even the 2,000-yard season.

Its investigative inquiry outperforms true-crime darlings like Making a Murderer or The Jinx. And as a sociopolitical think piece, it rivals the best documentaries of Spike Lee, Errol Morris, or Alex Gibney. Stylistically, it looks a bit like SportsCenter. But in terms of substance, it can't be beat.