Thunderstruck!: Thor: Ragnarok is a Standard Story with an Amazing Middle

Thor: Ragnarok is a good attempt at something new, but it could've gone even weirder! 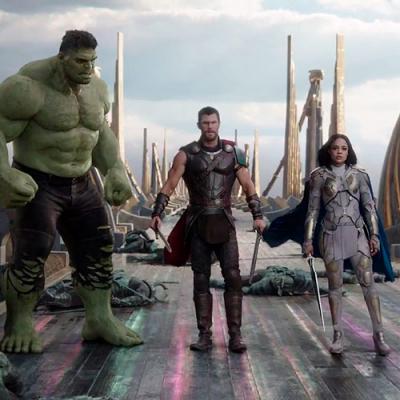 For nearly ten years now, the Marvel movies have been hitting theaters at least twice a year with their tales of superheroes teaming up to defeat some villain or monster who wants to destroy the world. It's a very successful formula, but audiences have been complaining lately about too much of the same thing; the so-called "superhero fatigue" we've been told about. Comedy director Taika Waititi (What We Do in the Shadows) has tried to fix this by taking the Thor series in a new, imaginative direction. Does he succeed? Well … yes and no.

Chris Hemsworth's Thor suddenly finds himself beaten and cast out to the far reaches of the universe by a new adversary: the all-powerful "Goddess of Death" (a delightfully hammy Cate Blanchett) who plans to take control of the realm of Asgard and eventually the rest of the universe! It sounds like pretty standard Marvel stuff, and it is until Thor ends up on a literal junk heap of a planet where he's captured and forced to do battle in a gladiatorial arena. As Thor rounds up allies among friends and foes both new and old, the film suddenly becomes a glorious acid-trip sci-fi adventure worthy of Flash Gordon.

Ironically, Thor: Ragnarok is at its best when it doesn't follow the main story and instead just focuses on the world it creates — a wonderful world filled with quirky aliens, alcoholic mythical warriors and Jeff Goldblum stealing every scene he's in. After that amazing middle segment though, it goes back to standard "save the day" superhero fare. Thor: Ragnarok is a good attempt at something new, but it could've gone even weirder! — Forest Taylor