Before there was Rent, there was Tick, Tick…BOOM! 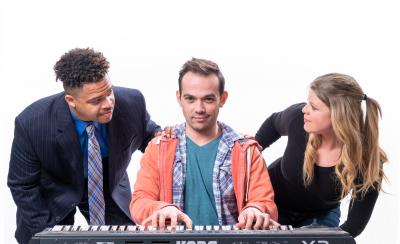 NOTE: The performances scheduled for Friday and Saturday, April 29 and 30, have been canceled due to a cast member testing positive for COVID. Shows on Sunday, May 1, will proceed as scheduled.

If you're familiar with Jonathan Larson, it is likely due to his success as the creator of the massive Broadway hit Rent, a fan-favorite for many theater-goers both young and old. But before Rent could soar, Tick, Tick…BOOM! had to explode onto the stage.

An autobiographical musical, Tick, Tick…BOOM! is the story of Jonathan Larson's struggle as an aspiring composer. Still waiting tables and trying to write the "great American musical" in the ever-competitive New York City theater scene, Jon finds himself questioning all his life choices up to this point on the eve of his 30th birthday. His girlfriend wants to get married and move out of the city, while his best friend is making good money working on Madison Avenue. Should he give up his dreams, or courageously continue on?

Originally performed as a solo piece by Larson starting in 1990, the work was revised by playwright David Auburn following Larson's 1996 death and premiered off-Broadway in 2001. Since then, the show has seen major success across many platforms, including West End productions as well as a 2021 film adaptation directed by Lin-Manuel Miranda and starring Andrew Garfield as Larson.

Moving, funny, and exciting, Tick, Tick…BOOM! will resonate with anyone who has struggled to find their way while following their dreams.