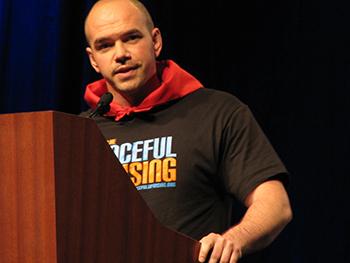 In 2008, DeChristopher disrupted a controversial Bureau of Land Management oil and gas auction by posing as Bidder 70 and outbidding oil companies for parcels around national parks in Utah. He was prosecuted for his act of civil disobedience, and spent 21 months in federal prison. Subsequently, DeChristopher gained international attention and a platform to address the urgency of the climate crisis and to argue the need for bold action to create a just and healthy world. The U.S. Secretary of the Interior later invalidated the auction, ruling that the Bureau of Land Management had broken its own internal processes in auctioning off the public lands for the purpose of energy development. Released from prison in April 2013, DeChristopher now attends Harvard Divinity School where he studies justice and peace movements.

DeChristopher's Earth Day lecture is titled "Finding Strength in Vulnerability," focusing on the necessity of nonviolent civil disobedience as a catalyst for powerful social change in American history.

"We are honored to have Mr. DeChristopher keynote our celebration of Earth Day," said Dr. Chris Magoc, professor of history and Green Team co-founder. "In part because of his own courageous willingness to go to jail, Tim speaks with a rare moral authority on the issue of climate change and energy development.

"His message that the worsening climate crisis demands actions of conscience and peaceful resistance is one we believe important to bring to the greater Erie community."

His talk is co-sponsored by the Mercyhurst Green Team and the Evelyn Lincoln Institute for Ethics and Society. The annual lecture series honors Sister Maura Smith, who established the celebration of Earth Day at Mercyhurst in 1970, co-founded the Green Team in 1999, and developed environmental and sustainability studies programs at Mercyhurst. Sister Maura, the recipient of the Mercyhurst Sustainability Award, died Nov. 13, 2015. For more than a decade, the lecture has featured acclaimed environmental authors and activists, including Bill McKibben, Sandra Steingraber, and Lois Gibbs.

Monday, April 18, at 7 p.m. in Taylor Little Theatre. Free and open to the public.

For information about his Erie lecture, contact Dr. Daniel McFee, director of the Evelyn Lincoln Institute for Ethics and Society, dmcfee@mercyhurst.edu, or Dr. Chris Magoc of the Mercyhurst Green Team, cmagoc@mercyhurst.edu.