The engineer-turned-developer has always been a dreamer. 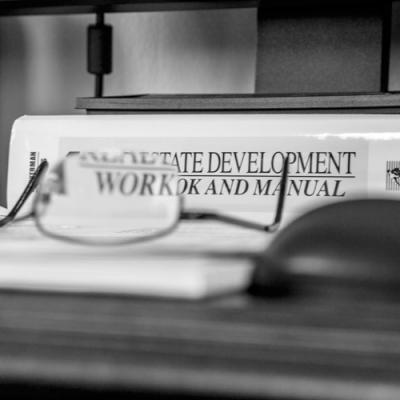 Behind an austere door on the third floor of the Renaissance Centre, Tom Kennedy buzzes about his office. Time pauses between early and late morning and settles into an otherwise average Thursday in Erie, Pa. Inside the tallest building in Pennsylvania's fourth largest city, Kennedy shifts quickly between his two desks, searching for something.

"I don't know if you want this or not, but I have a recent copy of my résumé – a list of my employment background," he says, handing over two pieces of paper stapled together. "That way we don't really have to talk about it."

Kennedy shrugs off his catalogue of accomplishments not because they're unremarkable, nor out of hubris. Experience quantified by bullet points belies the real story of this real estate developer – one of hard work, humility, and an innate ability to not fear failure. And he knows this; he's lived it. Success is an easier story to write than the come-up – the long hours, late nights, weekends sacrificed on the altar of achievement. And the president of Professional Development Associates, Inc. knows this, too, better than most.

Kennedy's from New York City. Because of that, people can be quick to assume that he comes from money. His last name conjures images of wealth; weekends spent at Martha's Vineyard, not hanging drywall in low-income properties in Erie. But Kennedy is a self-made man, unrelated to the royal U.S. bloodline. Both of his parents' collars were blue. They worked hard and encouraged their children to do the same. He didn't grow up with a silver spoon; rather, in a borough where youth looking to excel slung newspapers early in the morning and swept shops late at night, carving out their share of the American Dream.

Moving from paintings and photos of boats to his bookcases, Kennedy speaks in bursts. He smiles often and laughs genuinely. He shifts topics with little regard for transitions. He's not hard to follow – his excitement is contagious and comes on without warning; he's friendly, and it's easy to feel like you've known him for years in minutes – but it can be difficult to keep up. He knows this, too, and finds anecdotes along the way to slow down his thoughts.

Just a few years ago, he explains, he boarded the Renaissance Centre elevator on the fourteenth floor. A woman and her son were already there. He did what any decent person would do: said hello and asked how she was doing.

"Not so good," she responded. Her son had just been diagnosed with ADD, she told him.

"'Oh,' I said, 'that's great! I also have ADD – and I own the building!'" he says, laughing. "We're so quick to put labels on things. My mind is always thinking about things … you know, it can be a real strength if you use it."

Kennedy channels that gift by embracing his curiosity and a fearlessness to, as he puts it, act on the "ready, fire, aim" mantra. Which explains his success as a developer.

Standing on the corner of State and Ninth streets, he eyed up the Palace Building. "If I could do anything and not fail," he recounts thinking, "I'd buy that building." So he did.

The what-would-you-do-if-you-knew-you-couldn't-fail notion came to Kennedy while Zig Ziglar piped through his car's stereo system, when he'd travel from job site to job site as a sales and application engineer, after studying mechanical engineering at SUNY Maritime College in the early '80s. Kennedy daydreamed. Took notes. Observed his surroundings constantly. Thought about what his future might look like.

"Ask someone who's been doing what you want to do for ten years and you'll get a good sense of where you'll be in ten years," he says. "A lot of people I worked with gave up on their dreams for various reasons and didn't seem happy about that."

After living in New Orleans, then New Jersey, and then Pittsburgh, Kennedy landed in Erie because of General Electric. As his time as a twentysomething neared the threshold to becoming a thirtysomething, he thought about life outside of his 9-to-5. Before Kennedy would purchase the Palace Building – his first large acquisition – he started small: $4,000 investment small.

He purchased his first property at the corner on Fourth and Cherry streets, heeding the advice of an economics professor. That professor told his students if they took anything away from the class, it was to purchase property where they work and rent it out to their colleagues. Kennedy laughed it off as odd guidance, but after renting a room from a fellow engineer at his first job with Ingersoll Rand in New Jersey, the counsel took on real meaning.

Kennedy soon amassed twenty-odd more properties, including the Palace Building, and quit his full-time job before turning 30, which caught the eye of the press. In his office, he has an old Erie Times-News clipping. He's photographed mid-glimpse, gazing out of his office window at the nearby Baldwin Building.

"If I could do anything and know I wouldn't fail …" he says, smiling.

The Baldwins, Kennedy had discovered, planned to auction off the building and give the proceeds to charity. Although he had sunk his savings into the Palace Building, Kennedy headed to a local bank the day of the auction and obtained $25,000 on a line of credit to make him an eligible bidder. When he showed up, he was handed a placard with "2" on it. There wouldn't be a "3" or "4" or any other number but "1" – held by the Baldwins.

After getting the closing period extended from thirty to ninety days, Kennedy scrambled to find the funding. It's not that he doubted his ability to purchase the building, or didn't realize he would need the money; it's that not having the money first hadn't scared him out of taking action. It was ready, fire, aim, and he hit his mark.

Since then, Kennedy's been busy. Almost too busy to stop and measure his success. "It's always on to the next project, on to the next thing that catches my eye," he explains.

In the mid-2000s, Kennedy secured the former Meadville Junior High School – equal in size to the Renaissance Centre – and converted it into apartments. Then he sent a message to the president of Cobblestone Hotels via LinkedIn. Kennedy now has seven hotels – including one planned for the Bayfront, one at Penn State Erie, The Behrend College, and one in Texas – underway.

"When we first met, I told them our plan was to have five hotels in five years," he says, explaining that Cobblestone officials said they hear that often but don't see it. "We're on our seventh project in year three."

Tom Kennedy, the engineer, the developer, the New Yorker, the not-that-Kennedy Kennedy, has never dreamed of returning to New York City. "Sometimes I get frustrated when people don't realize all of the things we have here," he says. "We have our challenges, sure, but we'll overcome them."

From the highest point in the tallest building in the city, he has a good vantage point.

"It's really beautiful, isn't it?" Kennedy says, gazing out a fourteenth floor window of the Renaissance Centre. It's unclear whether he means the Lake, the City, a nearby building, or something else he sees that others don't. What is clear is that he's still looking. And he's still seeing. And failure isn't on the horizon.