Our favorites from a busy year in music 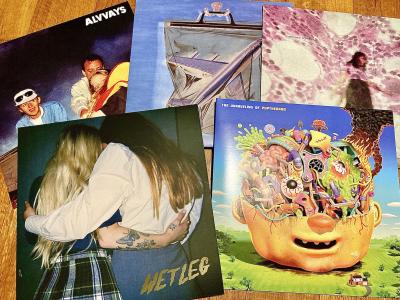 Any list-loving media-lover relishes a good end-of-the-year countdown, and we are no exception. Since 2017, Aaron Mook and Nick Warren have been working together to build their combined roundup of favorites. There's a whole weighted scale filled with variables at work behind the scenes. It's all very scientific, we assure you. But, what you end up with is above all a top 10 list of albums that moved us, that we left on repeat, and that stayed in our head and heart.

In 2019, experimental singer-songwriter Alex G released House of Sugar, his best record at the time (and one that topped our End of the Year list here at the Reader). Three years later, Alex Giannascoli surpassed himself again and topped our list with God Save the Animals, a collection split between down-to-earth Americana and otherworldly soundscapes. The record feels like a victory lap, but a weary one (Giannascoli spends part of "Miracles'' asking how many more songs he has to write before he can "turn it off and say goodnight"), a culmination of everything he's created prior to this. It's no surprise, then, that the album contains an alarming number of his best songs to date, including the hyperpop-tinged piano ballad "Immunity" and the irresistible acoustic-rock of lead single "Runner." In short, there's never been a better time to dive into this prolific songwriter's catalog. — AM

From "Archie, Marry Me" through their sophomore album, Antisocialites, Alvvays has continued to capture the eyes, ears, and hearts of indie rock fans everywhere. But Blue Rev is different; it's the kind of once-in-a-lifetime record that could make a band's career and propel them beyond the success of a few popular singles. From the swirling guitars of opening track "The Pharmacist" to the Johnny Marr-esque jangle-pop of album highlight "After the Earthquake," Blue Rev is a carefully curated album designed to offer something for indie rock fans of all generations, presented with a unique Technicolor swirl. — AM

3. The Unraveling of PUPTHEBAND // PUP

Likely the best working punk band active today, it's no coincidence that PUP are also one of the most ambitious. While that aim is shrouded in a slacker haze of young adult existentialism, it hits hard. From the first notes and sentiments of the piano-based "Four Chords," the listener realizes that this ain't no normal punk album. With the anxiety of Jeff Rosenstock and the grace of the Hotelier, the Toronto-based quartet's fourth full-length album is perhaps their best, and certainly their most varied. Highlights include "Totally Fine," and "Matilda" with their anthemic earworms that swirl in your heads for days. — NW

If The 1975 haven't won you ever yet, they might with this one — or their next. The band has offered increasingly ambitious projects since 2018's A Brief Inquiry Into Online Relationships, resulting in electronic experimentation and even dancier hooks. On Being Funny in a Foreign Language, the band has never sounded poppier or more skilled at songwriting. From the Huey Lewis-inspired single "Happiness" to "All I Need to Hear," a slow-burning ballad destined for weddings, The 1975 has pulled out all the stops and graduated from one of the most inescapable bands in the age of the internet to one of the finest. — AM

Just before their sophomore release, Cambridgeshire, England band Black Country, New Road saw themselves going from a septet to a sextet. With the departure of their frontman and guitarist Isaac Wood due to mental health issues, what would the group do moving on? While the post-punk chamber pop thankfully will continue on, fans at least have been left with two utterly brilliant works, filled with complex instrumentation and insightful lyrics fit for fans of Black Midi and Slint. Wood's unique vocal delivery combines with textured horn and klezmer-like passages, creating an almost surreal listening experience. — NW

Just as Soccer Mommy's 2020 breakthrough, color theory, expanded upon the minimalist singer-songwriter palette of her debut, Clean, this year's Sometimes, Forever (produced by electronic musician Oneohtrix Point Never) represents a stylistic evolution for frontwoman Sophia Allison. While her songwriting remains as sturdy as ever, her reliable brand of '90s-influenced indie rock is now joined by cascading synthesizers and shoegaze-kissed hooks on songs like "With U" and "Shotgun," respectively. For Soccer Mommy fans, it's yet another step forward, and for newcomers, it offers the forward-thinking ideas and melodies Allison has always excelled at. — AM

Wet Leg burst onto the scene like a wildfire. Their self-titled debut album had all the earmarks of an indie favorite for fans of bands like The Yeah Yeah Yeahs, The Julie Ruin, and Beach Bunny. What was perhaps a bit surprising is just how commercially successful the album became. A veritable mainstream hit, with singles like "Wet Dream" and "Chaise Longue" charting in the US, UK, and Japan. Nominated for four U.S. Grammy awards including Best New Artist, Wet Leg's eponymous first offering hit well immediately with critics and fans alike, landing spots on numerous festivals throughout 2022. — NW

8. Can I Take My Hounds to Heaven // Tyler Childers

The sheer ambition of Can I Take My Hounds to Heaven is impressive. For his fifth studio album, the Kentucky-based troubadour chose to release it as a triptych. The 24 tracks contain what is essentially three different versions of the same album, each with noticeable stylistic variations. The "Hallelujah Version" showcases Childers and his band, The Food Stamps, at their most recognizable, in all of their rollicking alt-country, bluesy glory. The "Jubilee Version" is also fantastic, with its mix of gospel and Dixieland arrangements. Finally, the "Joyful Noise Version" employs sampling and electronic elements, capping off what's easily one of the most accessible country releases of the year. — NW

The show is over; that's what self-defined boy band and hip-hop collective BROCKHAMPTON announced abruptly around the time of their Coachella set earlier this year. Their "final album," The Family, was teased all over social media before their actual final album, TM, was released as a surprise for fans just a day later. But The Family stands out as a fascinating document about the band as opposed to one created by them; group leader Kevin Abstract uses the 35 minutes of music required by RCA to recount the band's highs and lows against joyous chipmunk-soul samples and production. — AM

Australia's King Gizzard & the Lizard Wizard deserve a special prize for 2022. In this year alone, the already prolific band released not one, but five full-length studio albums. Who does that? Beginning in March with Made in Timeland, then the double-album Omnium Gatherum, October's Ice, Death, Planets, Lungs, Mushrooms and Lava, Laminated Denim less than a week later, and finally Changes just two weeks after that. For my money, the two 15-minute tracks of Laminated Denim, with their psychedelic improvisational tone is hard to beat, with the retro grooves and conceptual conceit of Changes coming in at a very close second. — NW