Another year, another great selection of books 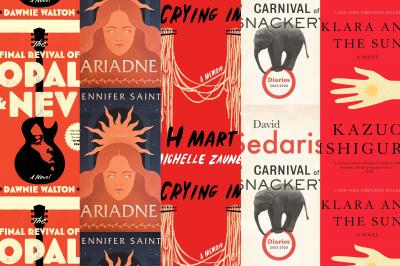 In 2021, we continued to try our best to adjust to a new normal while navigating an ongoing pandemic. With many of us facing uncertainty going into the year, it was nice to see that many authors continued to write excellent prose and offered a reprieve from another year of the unknown.

In Greek mythology, women most often are portrayed at best as background characters or points of advancement for male gods and heroes, with many more falling into obscurity or ruin. In her stunning debut novel, Jennifer Saint flips the script on what we know about Ariadne, the Princess of Crete, by retelling the legend of Theseus and the Minotaur from the perspective of the woman who was the catalyst for the events that unfolded in the labyrinth. A captivating, compelling, and at times heartbreaking story, Ariadne surpasses all expectations and earns itself a spot at the top of our list for the best books of the year.

Anyone who has met David Sedaris will often tell you the same thing: he is brutally honest, and brutally funny. In his follow-up to 2017's Theft By Finding: Diaries 1977-2002, Sedaris continues to prove his mastery in the art of comedy through his diary entries from 2003 up through 2020, a year many of us may want to forget. From planes to hotels and everywhere in between, Sedaris records life as he knows it, allowing readers a sampler of the sometimes bitter but sometimes sweet memories of the last two decades. Though things change as time continues forward, Sedaris has perfectly preserved the thoughts and feelings associated with the 2000s in a way only he can: filled with honesty and hilarity.

The Final Revival of Opal & Nev by Dawnie Walton

Dawnie Walton makes a stunning debut in this uniquely told rendition of fictional rockers Opal Jewel and Neville Charles. Composed from fictional interviews, transcripts, footnotes, letters, and editor's notes, this distinctive novel transcends fiction and allows readers to dive into the all-too-real-feeling world of Opal and Nev as they navigate the rock music scene of the 1970s. As the duo tries to reunite decades later for one last tour, the past doesn't stay buried and unearthed with it are secrets and allegations that threaten to blow everything up. Riveting and utterly spellbinding, The Final Revival of Opal & Nev will draw readers in, grab a hold of them, and never let go.

You may know Michelle Zauner better as the frontwoman of indie rock band Japanese Breakfast, but after reading Crying in H Mart, you'll know why she's made our top books of the year list. In this memoir, she reflects on growing up Korean American, losing that identity as she grew older, and finding it again following her mother's diagnosis with terminal cancer when Zauner was only 25. Masterfully written with both honesty and humor, Zauner's debut will resonate with many and leave readers wanting more.

Klara and the Sun by Kazuo Ishiguro

With possibly the most unique story concept on our list, Kazuo Ishiguro's newest novel tells the tale of a near future in which Klara, an Artificial Friend (think humanoid AI), observes peoples' behaviors from her place atop a shelf in a store, hoping that a customer will choose her. With Klara as narrator, the perspective is unique and unforgettable. An excellent look at our ever-changing world through the eyes of Klara, this book aims to understand the nature of humanity and the human heart. Readers who enjoyed Ishiguro's previous works — such as Never Let Me Go and The Remains of the Day — will be absolutely entranced by this novel that explores the fundamental question: what does it mean to love?

Under the Whispering Door by T.J. Klune

The Four Winds by Kristin Hannah

Be sure to also check out our other favorites that we reviewed throughout the year:

When We Were Young by Richard Roper

The Lost Apothecary by Sarah Penner