Reflections on the year, both near and far 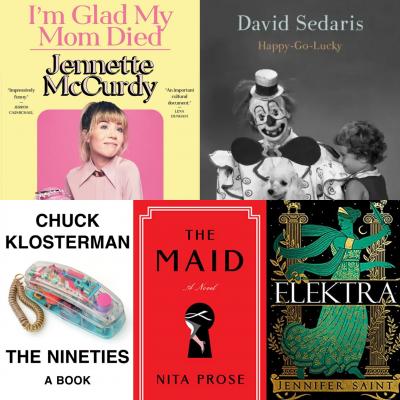 It is a strange feeling to be rounding out yet another year still in the midst of a pandemic, but here we find ourselves again. With another revolution around the sun under our belts, it seems that this was a good year for reflection: on relationships past, on decades past, on what makes our differences important, on ancient times, and even on the pandemic itself. Here's a look at the best books of the year.

Actor and author Jennette McCurdy's heartbreaking yet hilarious memoir should be at the top of your reading list. Talking openly about her experience with the abusive parental relationship she had with her mom, McCurdy lays bare the trauma and eventual healing she experienced throughout her lifetime. Following her complicated, tragic, and traumatic childhood in which she was swept up not only in her rise to fame, but also in the demanding lifestyle her mother imposed on her, McCurdy's emotion shines through, thanks to her strong voice and even stronger personality. Written in a way that captivates readers from the start, this is a memoir to remember. — Ally Kutz

If there's anyone to trust with truthful, hilarious commentary on current events, it's David Sedaris. In this year's Happy-Go-Lucky, Sedaris reflects on the experience of the pandemic and associated lockdowns, as well as the "new normal" to which we have all had to adjust. Unable to tour and read for audiences — the part of his work he loves most — Sedaris finds himself walking for miles in a nearly deserted city, vacuuming his apartment twice a day, ruminating on what it means to be recently orphaned, and no longer being someone's son (Sedaris' father passed in 2021). As the world slowly settles into this new normal, Sedaris finds himself back in it with a new confidence. As always, Sedaris perfectly portrays the unique perspective about the recent mayhem, expressing best the drive for the connection that we all desire. — Ally Kutz

The Nineties by Chuck Klosterman

The Nineties is remarkable in what it is not: this book, which exhaustively covers the decade in which its author came of age, is nearly completely devoid of nostalgia. Instead, Klosterman makes miraculous connections between seemingly disconnected subjects and, while doing so, gives a critical view of the decade that built our world into what it is today. His subject matter varies wildly: third party political candidates and their effect on our current political landscape, the birth of the internet and its effect on literally everything (music, news, television, the way we interact with each other, etc.), grunge music, O.J. Simpson, conspiracy theories, cloning, and yes, even Crystal Pepsi. Whether you're a fan of Klosterman already or have never heard of him, whether you lived through the '90s or not, it's likely that you'd find this book a fascinating historical document that is actually fun to read. — Erin Phillips

The Maid by Nita Prose

In this wonderful debut, Nita Prose paints the picture of Molly Gray, one of our favorite lead characters of the year. Molly isn't your typical 25-year-old; she struggles with social skills and situations, often misreading the intentions of others and making already bad situations worse. Before she died, her Gran was able to help her navigate some situations, but now Molly must go it alone. Her neat and orderly life as a maid at the Regency Grand Hotel is turned upside down when she enters the room of Charles Black, an infamous and wealthy tycoon, to find him dead in his bed. Due to her unusual demeanor and lack of social understanding, she soon finds herself the prime suspect in his death. Nita Prose hits the nail on the head with The Maid, showing readers that being different isn't necessarily bad — in fact, it can be one of our greatest assets. Filled to the brim with mystery, suspense, and a few laughable encounters, this is the perfect mystery thriller to round out your year. — Ally Kutz

With the major success of her first novel Ariadne (one of the Erie Reader's top books of 2021), it is no surprise that Saint's 2022 novel Elektra made our list this year. Following one of Greek mythology's most infamous heroines, Elektra's journey seems doomed from the start thanks to an ancient curse. Intertwined with the stories of two other women — Clytemnestra and Cassandra — Saint's epic retelling of these women's paths is captivating from the start. One woman betrayed, one never believed, and one cursed from birth, Saint weaves together these women's tales in such vivid imagery and beauty to ultimately create a world into which the reader can dive deep, immersing themselves in both the lyrical style of her writing and the richness of the mythology. — Ally Kutz

Be sure to check out some of our other favorites reviewed throughout the year: