Our staff shares this year's favorites from right here in Erie 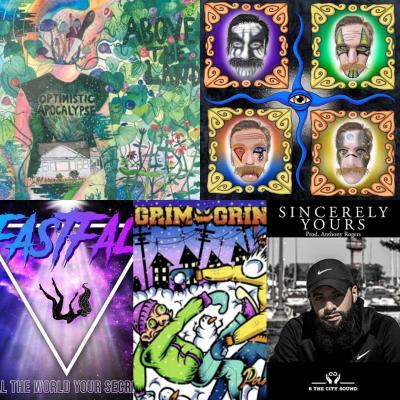 There were so many excellent local releases this year. It's pretty incredible, really. And, as the music scene grows, so does our list of music contributors here at the Erie Reader. Since this was a special year all around, we decided to do things a little differently. For seven years since 2015, our former managing editor and part-time music reviewer Nick Warren has drafted up his top three albums from the Erie area. This year, we had five of our writers pick their number one choice, for a deservingly bigger list and some top quality recommendations.

The pace and timing of this album is perfect. It displays a great balance between fun raps, melodies, and meaningful lyrics. Sincerely Yours shares the story of an artist who wants success as much as he wants peace and happiness. Though that may seem profound, sonically, the album isn't a downer. You can definitely throw this on while riding around town or having a get-together at home. Self-produced and written by the man himself, Rogers has never failed in maintaining both rhymes and production. Every part of creating this opus feels natural and to have come from a genuine place. Released on his birthday back in April, a month that's usually dreary with the deep anticipation of summer, I can say that this is a project that will uplift your mood. — Charles Brown

BLUNT GUTS, the musical side to artist and Basement Transitions owner Bob Jensen, released My Mom Thinks I'm Depressed at the end of 2022. It's the follow up to 2021's Cranberry Blood. With his newest release, Jenson continues to carve out his own unique place in electronic music, touching lyrically on the insecurities that many people face and how they feel on the inside versus how they appear on the outside. The addition of trumpet to the mix gives the album a trip-hop feel, and it is, at times, reminiscent of recordings by William S. Burroughs from the '80s and '90s. — Larry Wheaton

Tell the World Your Secrets // Fastfall

This EP is everything that post-hardcore fans could want. Fastfall is brand new to the local music scene, formed in 2020, but have still managed to leave a massive impression with this project. The sound and lyrics on these five songs are doused in angsty, relatable subjects ranging from mental health to political justice. This band clearly knows just where to lead their genre to keep it fresh, keeping listeners on their toes and leaving them wanting more of that mid-2000s rocker nostalgia with a new perspective. The high-energy momentum of this group gives us all the hopeful boost we need to keep post-hardcore alive and well.
— Cypher Eihwaz

For their debut album, Erie newcomers Grim Grin released a full-length record with 11 tracks of perfection, and thank goodness they did. Parry This boasts some of the catchiest songs imaginable, channeling the best parts of '90s punk — the gruffness and harmonics of Bad Religion and Good Riddance and balanced fun and gravitas of No Use For a Name and Millencolin. With expertly crafted singalongs and riffs, tracks like "Radio," "Remember You," and "Bad Habit" will stay in your head for days, making you track down their next show like a raving lunatic. With this release, it's easy for this reviewer to cite them as one of the most exciting local punk bands in over a decade. — Nick Warren

Above the Land // Optimistic Apocalypse

Erie has waited five years for new music from beloved singer-songwriter Mckenzie Sprague, also known as Optimistic Apocalypse, and her sophomore album, Above the Land, has made it beyond worthwhile. A favorite of numerous writers here, Sprague uses this project to expand upon the songwriting and ideas displayed on her debut album, 2017's The Art of Love. From the opening moments of "Cardinal" to the album's centerpiece, "Centipede," the ever-growing songwriter contributes gorgeous vocal work to songs often related to nature and our relationship with it; it's as unique as her own watercolor artwork adorning the album's cover. — Aaron Mook