An aptly titled project in the sense that it is filled to the brim with unexpected, over-the-top attractions 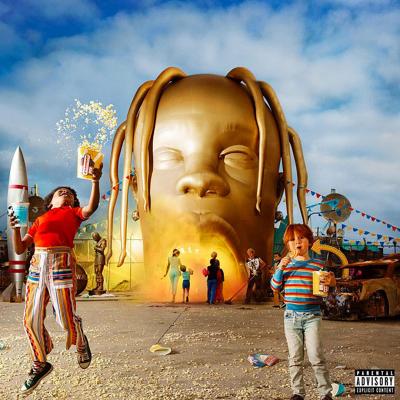 The long-rumored follow-up to Travis Scott's polarizing debut, Rodeo, ASTROWORLD is an aptly titled project in the sense that it is filled to the brim with unexpected, over-the-top attractions (taking its name from a closed Six Flags park in Scott's hometown of Houston). Features and producers are often let loose on spacey instrumentals as Scott, the master of ceremonies, remains at the helm. Scott's merits have long been debated among hip-hop fans, with many detractors claiming the artist simply rides trends set by his peers (a criticism applicable to a large portion of mainstream hip-hop) while defenders point out that the already blossoming artist still has plenty of opportunities to continue growing into himself. A mentee of Kanye West, Scott's talents similarly lie with the way he corrals, edits, and applies his guests, crafting sonic sculptures alongside the likes of Drake ("SICKO MODE"), The Weeknd (featured on the Kevin Parker-produced psychedelic standout "SKELETONS"), and Nineteen85 (on the vulnerable, hypnotic closer, "Coffee Bean"). A landmark project with scope and diverse, ensemble credits, it's no stretch to imagine ASTROWORLD becoming the My Beautiful Dark Twisted Fantasy of trap music. — Aaron Mook