Tropidelic Stomp Back to the Rook 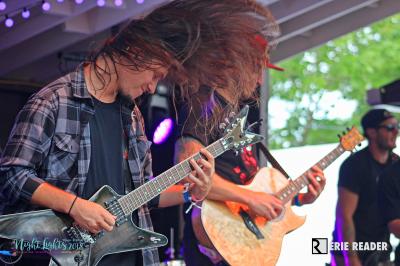 Tropical vibes will be returning to Erie as the heavy-hitting Cleveland band Tropidelic makes an appearance at the King's Rook Club. The funk, reggae, rock, and hip-hop-infused band will be stopping by during their 2019 Winter/Spring Tour with special guests TreeHouse!.

Drummer of Tropidelic Rex Larkman states, "When we play the King's Rook everyone is there for the same reason, to dance and party to some in-your-face music. We sync with the crowd's energy so well, it makes for the loudest show we do!"

Tropidelic is comprised of six members that have been performing across the country for over four years together. Now signed by LAW records, the band always brings the heat to their performances with their unique musical personalities and dance-fueled setlists. With their album Heavy is the Head hitting No. 1 on the iTunes reggae chart in 2017, Tropidelic continues to make strides. Along with a new album coming out this summer, they will be hosting their third annual Freakstomp Music Festival, performing on the 311 Caribbean Cruise, and more.

Joining them are TreeHouse!, a four-man, psychedelic reggae jam band from Myrtle Beach, South Carolina that has been playing together for seven years. On Lifted, the group's strongest studio album to date, they share words of positivity and encourage unity amongst their audiences. They also will be releasing a new album later this year.

Both bands have teamed up with renowned musical artists such as The Dirty Heads, Pepper, and many more. Tropidelic has even performed at big-time festivals such as Electric Forest and Vans Warped Tour.

Tropidelic packed the house when they performed at the King's Rook Club last year in October, so make sure to not miss out on your opportunity to jam out at one of the hottest shows this spring. — Symone Crockett