by Erin Phillips
View ProfileInstagramRSS Feed
January 20, 2023 at 8:00 AM 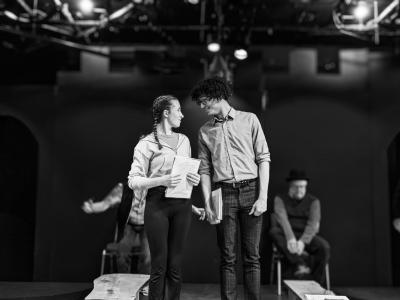 Megan Harrison
Lead performers Molly Parks and Isaiah Aldridge bring new life to the characters of Louisa and Matt in the timeless love story The Fantasticks, coming to the PACA stage for seven shows in January and February.

The Fantasticks may have been written in the 1960s, but the musical's familiar love story has continued to connect with audiences through the decades. The Fantasticks originally premiered at a small off-Broadway theater in 1960 and ran uninterrupted for 42 years with over 17,000 performances before it closed in 2002, giving the play the title of the longest-running uninterrupted show of any kind in the United States and the world's longest running musical. This play is timeless, as proven by its sustained popularity, and this month it's coming to the stage at PACA to connect with audiences once again.

Director Bob Martin is excited to present the show at PACA, specifically because of the scale of the performance space: "It's a small, intimate show, and the PACA stage is the perfect place for an audience to get swept up in this eight-character musical. The cast includes actors who have loved the show for years and some who have just been introduced to it. From the very first rehearsal the cast was engaged by the simple brilliance of the show." The cast is composed of some Erie performance gold including: Joe Greulich, Molly Parks, Isaiah Aldridge, Michael Meyer, Dan Bainbridge, Rosie Hitt, Jordan Gilmore, and Chris Pedersen.

The musical presents a young couple, united through a trick played by each of their fathers, who initially find young love, then drift apart, and eventually come back together into a more mature version of their earlier love. According to the narrator El Gallo,"without a hurt, the heart is hollow." These are themes that can transcend any cultural barrier and connect to any audience.