Basement Transmissions is hosting a pop-up shop during the day, and a metal and pop punk show in the evening. 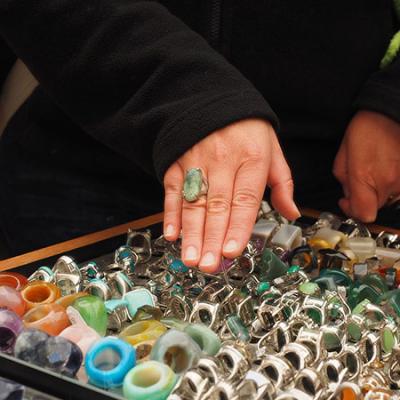 In the spirit of diversity, Basement Transmissions is hosting two vastly different events on the same day, including a pop-up shop during the day, and a metal and pop punk show in the evening.

The pop-up shop will be a sort of bizarre bazaar. With local artists selling their work, and musicians their merch, the shop truly embodies the essence of Basement Transmissions – supporting the arts. BT owner Bob Jensen is himself an artist, whose eccentric and off-the-wall works have been sold at BT in the past. He's likely to be showcased again at the pop-up shop, along with many others.

"The store will be focused on the underground and avant-garde, general weirdness is encouraged," said shop organizer, Ben Himan. "However, anything creative and handmade has a place. Some examples of items that will be found at the pop-up shop include clothes, jewelry, drawings, paintings, puppets, local underground music and merch, reupholstered furniture, lamps, bleep bloops, and knickknacks."

Himan added that a portion of the profits will go toward funding a permanent store on Peach Street called Gem City Records and Collectibles. A Kickstarter campaign for the store will also launch shortly after the pop-up shop closes.

The second event of the day is the metal/pop punk hybrid show featuring local and regional bands Ashes of a Generation, Mallory Run, Into the Harbor, Jurassic Skatepark, and Raven's Law.

From Meadville, Ashes of a Generation brings their metalcore infused with southern rock stylings to the stage. The southern rock influence takes the lead in their song "Plenty More," while "Collection Day" stays true to their metal roots. Erie's Mallory Run is hard to pin down to any one genre. Some songs are pop punk, some lean toward emo, and sometimes the band even delves into hardcore. Regardless, Mallory Run is making headway in the scene. They recently signed to Wilhelm Records, and are working on their next release on the label, a follow-up to their 2016 self-titled EP. I've had the pleasure to hear some of their new material live, and I can't wait to see what this band does next.

Everything that Basement Transmissions represents – supporting local art and music – is perfectly manifest in the events of this day. So come out and show your support for local creativity. – Tommy Shannon