Two Green Thumbs Up for *Little Shop of Horrors 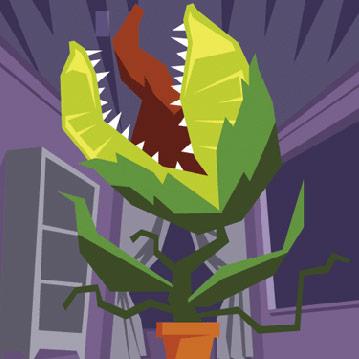 Azaleas not cooperating this year? Tulips dying off faster than they can bloom? Those are fickle flora, for sure – but not as feisty as a mutant Venus flytrap that literally belts out showtunes in thirst of blood.

Little Shop of Horrors is a 1982 black comedy horror musical based on the 1960 film of the same name. The story centers on lovelorn Seymour Krelborn, a meek florist's assistant with a serious crush on his pretty blonde coworker, Audrey.  Lamentably, Audrey is dating deadbeat dentist Orin Scrivello (an unlikely adopter of the greaser aesthetic) and  Seymour's boss, Mr. Mushnik, cuts him no slack. Seymour's fate, as well as the fortunes of Mushnik's Skid Row Florists, seem to turn when Seymour happens upon a strange plant in New York's Wholesale Flower District.  The neglected neighborhood swarms with publicity thanks to Seymour's pet project, the carnivorous Audrey II.

The only problem is that Audrey II (hilariously gifted with a rangy R&B singing voice) has a taste for human flesh. Audrey II's insatiable appetite sets the stage for Mushnik's downfall - and the spread of his alien species - in the second act. In short, this play is ridiculous. As such, it has cultivated considerable interest wherever it's been shown, the latest place being our own Erie Playhouse. Powerhouse singer Charlie Bunch lends his voice to Audrey II, with Curtis Jones III (Seymour) and Christine Daugherty (Audrey) assuming the leading roles.

Shows are scattered all throughout June, leaving plenty of time for plans to germinate. – Matt Swanseger