Untethered: Us is a Scary and Ambitious Jumble of Ideas 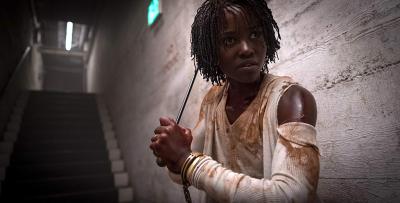 Jordan Peele surprised the world two years ago with Get Out, a smart, tense and politically radical horror film that hit with audiences, critics, and the Academy. Needless to say, his follow-up film Us had a lot to live up to. Thankfully, Peele ups the ante with a film that is larger, more ambitious and even more socially and politically minded than his masterful debut. Unfortunately, sometimes the film's ambitions get in the way of its narrative.

Following the Wilson family on a trip to their summer home, the film seems to present us with an idyllic little beach community. However, mother Adelaide (Lupita Nyong'o) has an intense fear of this place stemming from a traumatic experience from her childhood. Her fears are realized when the family is visited by a clan of invaders who seem to be their own funhouse mirror replicas. The family soon finds themselves fighting for their lives against their devious doppelgängers.

Whereas Get Out was about race, this film is clearly about class. We are introduced to a literal lower class of shadow people who have suffered at the expense of the protagonists' comfortable existence. As such, the film makes for a terrific analogy for so-called "first world guilt" of living well while knowing that an unseen society is living in misery and knowing how easily those tables could be turned. The film's political anger reveals itself further when it goes from a home-invasion film into a full-blown apocalyptic nightmare. This is admirable, ambitious filmmaking that sadly doesn't always mesh with the story trying to be told. There are so many ideas that some of them get dropped just as they're getting interesting. That aside, Us is still a smart, scary and entertaining ride through most of its twisted story. — Forest Taylor