Upfront: No Pie for You

by Cory Vaillancourt
View ProfileFacebookTwitterGoogle+RSS Feed
October 31, 2012 at 7:30 AM 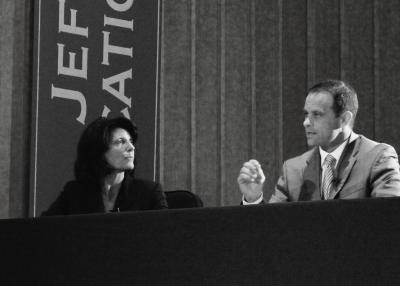 I hope you had the chance to see the final segment of the Erie Reader 2012 Downtown Debate Series on WICU, which aired on the night of Wednesday, Oct. 24. In that debate, we heard from Republican Janet Anderson and Democrat Sean Wiley, who are both seeking the Pennsylvania State Senate seat recently vacated by Republican Jane Earll.

Just as with the race between Democrat Ryan Bizzarro and Republican Jason Owen – who seek to fill Democrat John Hornaman's State House seat – this election is a temporary setback for Erie County. As I said in my last column, there's a river of money flowing through Harrisburg; one can go there with a bucket or with a thimble, and both Hornaman and Jane Earll done took their buckets away.

But the race between Anderson and Wiley isn't about the thimbles they'll bring to Harrisburg. According to Anderson, it's about who'll be sitting where. Near the end of our fairly pedestrian debate, she opened up on Wiley with a childish zinger so canned and stale you could literally hear it being popped, like a tin of that nasty cranberry goop at Thanksgiving dinner.

Sure, it got some chuckles. I'll admit, I was laughing. But I wasn't laughing with her.

Anderson had just unknowingly, succinctly, and appropriately encapsulated her juvenile, mean-spirited campaign of mistruths with a line someone else probably wrote for her.

This type of campaigning is a damn shame, really. Anderson's campaign started positively enough, like most do, but after mass defections by prominent local republicans and early polls showing her down by double-digits, Anderson adopted an alternative approach: if you can't paint yourself as someone voters want to run to, paint your opponent as someone voters want to run from.

It doesn't take a Karl Rove to see where this is going, but in the grand Upfront tradition of pointing out the obvious, making fun of it, and then distorting it to the edge of bizarre, I ask you to close your eyes and dream with me, dear Reader readers, as we travel to a magical land. It's a fairy-tale land where everyone takes responsibility for everything everyone else does, and Sean Wiley sports two huge gaudy expensive black-and-gold rings; I bring you now to… Janet Anderson's Erie.

Janet Anderson's Erie is an enchanted realm with lakes of Chardonnay and Misty 120s that grow on trees. It's a place where Sean Wiley is somehow responsible for the terrible financial management of Mark DiVecchio, as is the janitor in DiVecchio's office; however, the Business and Economic Development Director (and, later, Executive Director) of the Northwest Pennsylvania Regional Planning and Development Commission in Oil City – Janet Anderson – is somehow not responsible for Venango County unemployment jumping during her tenure there, from 6.6 percent in December 2008 to 8.2 percent in January 2012.

Janet Anderson's Erie is a dreamlike fantasyland, where the roads are paved with beef jerky and the clouds are made of mashed potatoes and Sean Wiley is, in some way, to blame for the shortsighted actions of the Erie County Council, as are the cops who man the metal detectors at the courthouse; but the Community & Economic Development Coordinator in the office of Senator Jane Earll – Janet Anderson – is in some strange way not responsible for Erie County unemployment spiking while she was there – from 4.5 percent in December 2006 to 6.4 percent in December of 2008. Senator Jane Earll, Anderson's boss, is also somehow exempt from blame.

Yes, intrepid voyagers, Janet Anderson's Erie is a place where the moon is made of cheese and where salad fixin's are utilized as currency and where Anderson – who, by her own reasoning, is responsible for economic downturns everywhere she's worked – garners endorsements from both DiVecchio and Earll, the two people who, by logical extension of her admonishments of Wiley, share ultimate responsibility with her for carving a swath of economic misadventure throughout northwestern Pennsylvania over the past six years.

Janet Anderson's Erie is a silly place, isn't it? I should have warned you. But you wouldn't have believed me. You see, by Anderson's logic, she wants to have her pie, and eat it too. It's almost childlike in how adorable that is. Really. Ultimately, all I have to say is: Don't worry about where you'll be sitting, Ms. Anderson. On Election Day, the voters of SD 49 should send you straight to your room. Without pie.

Election Day is Tuesday, Nov. 6; to find your polling place, click here or call 451.6275. And although you may be asked to show ID when you vote, it is not a requirement.