by Cory Vaillancourt
View ProfileFacebookTwitterGoogle+RSS Feed
November 29, 2012 at 11:30 AM 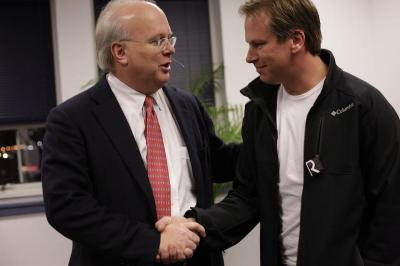 Campaign season is finally over. Sigh. I'm a fan, and I lament the passing of this special time just as NASCAR fans weep when there are no more left turns to make. Thanks for following along – this'll be the last political column from me - for a little while, at least. So, enjoy it, or, skip it; we'll be on to the silliness again soon enough. Speaking of silly…

Karl Rove rolled through town on Wednesday, Nov. 14 to take part in the Jefferson Educational Society's Global Futures Summit IV. The JES procured the controversial Rove – in a move both strategic and serendipitous – knowing full well that he'd be speaking just eight days after the 2012 presidential election.

His appearance drew much attention – the glaring spotlights of the national media once again came to our fair burg, and for a change it was because of neither the weather nor a collar bomb.

I like to think that it was because two weeks ago, I told you that Rove (the guy who took several hundred million dollars of other people's money to the casino and lost it all on red) would speak about the future of the Republican Party – a party that has lost the popular vote in five out of the last six presidential elections. So I'm just gonna keep on thinkin' that.

Regardless, I told you that both his timing and his topic would result in what I called the "Erie Manifesto." So I'm just gonna keep on callin' it that.

The Erie Manifesto was my fanciful supposition that perhaps, faced with a conservative social ideology that much of the country seems to be rejecting, Karl Rove would advise the Republican Party to abandon their largely religious-backed opposition to abortion, homosexuals, immigration, Obamacare, and marijuana. That Wednesday night was my chance to find out.

Just prior to his speech, Rove sat comfortably in a small conference room at the Northwest Pennsylvania Collegiate Academy, perched high atop State Street. He was friendly and cordial, and knew how to play to the small crowd of local reporters and cameramen who had assembled there. He began by answering a flurry of questions about the party's performance in the recent elections.

When my turn came, I asked him: When republicans reclaim the presidency in 2016, what does that party look like, ideologically?

"You know, I think it's a center-right party, it's a party that believes in limited government, low taxation, and pro-growth economic policies," Rove said. "I suspect by that point we'll also have some questions about military policy and national defense. It will be a strong national defense party."

In short, I got the blow off.

He knew what I was asking him – will there be moderation in the Republican Party's largely religious-backed opposition to abortion, homosexuals, immigration, Obamacare, and marijuana? You know, that "Erie Manifesto" thing I keep talking about?

No more beating around the bush. He didn't answer me the first time, so I had to flat-out ask: anything socially?

"I don't think so," he said. "I do think in substance there better be – in the way we communicate. But that's something we're going to talk about tonight."

Sooooooo, no; nothing on abortion, homosexuals, immigration, Obamacare, or marijuana. But this communication thing, well, it was intriguing. What could it mean?

Rather than grandiose and party-altering abandonment of their inflexible and illogical social agenda, Rove delivered a mix of tactics and tweaks directed towards the Republican Party during his speech.

Tactically, he talked about the need to implement a Howard Dean-esque field organization. Republicans are typically not known for their ground game, which hampers them year after year. He also said that SuperPacs are here to stay, and they're not new; they were just called labor unions in the past (haha, I see what you did there Karl Rove!). So, as I often say, you have to play the game by the rules that exist, not the rules you wish existed. That being said, Rove acknowledged that SuperPacs need to be run better, and not simply for the enrichment of the consultants who run them.

Tweak-wise, Rove talked about the need for more and better – you guessed it – communication with Hispanics, Asians, women, and young people. You know, that whole "talking with them, not at them" type thing.

So let me get this straight, Mr. Blossom. You want to once again raise hundreds of millions of SuperPac dollars to fund a more robust grassroots strategy that will reach Hispanics, Asians, women, and young people on their proverbial, virtual, or literal respective doorsteps?

Of what will you talk with them upon your arrival? Of your unchanging views on abortion, homosexuals, immigration, Obamacare, or marijuana? Now that's just silly.

Or is it silly like a fox? If I wrote this column in 1991 instead of those high-school English assignments I was working on, it also would have been about a party that had lost the popular vote in five out of the last six presidential elections.

That party was the Democratic Party.