People always say that the legislature is no place for on-the-job training; hogwash, I say.

by Cory Vaillancourt
View ProfileFacebookTwitterGoogle+RSS Feed
October 17, 2012 at 8:53 AM 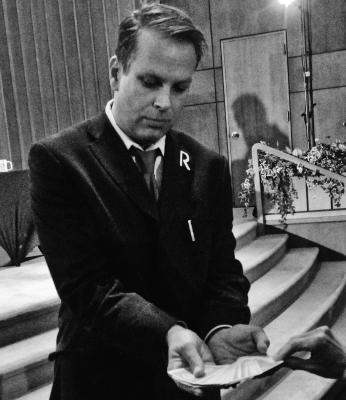 Just before the Erie Reader 2012 Downtown Debates kicked off last week, Ryan Bizzarro, Jason Owen, and me stood together, away from the bright lights and the TV cameras and the reporters and the 200-some people who were quickly taking their seats in the tan-carpeted auditorium of the Jefferson Educational Society.

I had a deck of cards in my hand. It was the same deck I used to select the candidate order in the primary election debates we held last April. Well-worn and red, this deck been in my possession for nearly 20 years now.

Back during the Fat Old Days – that unprecedented early 1990s economic boom sown by Reagan and reaped by Clinton – casinos used to give their used decks away, albeit after shaving off a corner of each card to prevent surreptitious reintroductions thereof; now, during these days of malaise, they want money for them. But back then, once those decks had played their role in their last game of chance, they were readily available and freely given from places like the Gold Strike Casino in Jean, Nev. (population: zero), where I acquired mine.

I fanned the deck out before the two candidates for the Pennsylvania State House District 3 seat; Republican Jason Owen, being the older of the two, drew first. It was a 10. Democrat Ryan Bizzarro drew a three.

He was right; back in April, he won not only the card draw, but also the debate and the primary election.

A deck of cards always seems to pronounce mystical and appropriate edicts from planes unseen, happened upon by chance but vague enough to resonate, like your horoscope. The cards often reveal that unseen story – as a hardcore blackjack player, I've often dreamt of getting a tattoo of a 10, a two, and a 10, and you know what that means. But on that night, as those proverbial cards were played, they indeed revealed to us the difference between a 10 and a three.

By most accounts, Jason Owen won this hand. He's an experienced and polished public speaker – further proof as to why attorneys usually make great candidates – and that ability helped him draw the clearest distinction of the night between his opponent, who had a hard time communicating his positions.

Now, fancy talkin' does not always equal fancy thinkin'. Often, it's quite the contrary. However, to be effective in Harrisburg, one must possess the ability to both comprehend and communicate the needs of their constituents to the legislature. Seeing how Owen describes himself as more libertarian than republican, he may not properly comprehend the issues of this particular district, despite being able to articulate his own positions clearly.

Why, John Hornaman, why?! There's a river of money flowing through Harrisburg, and one can go there with a bucket or a thimble; why, John Hornaman, why did you have to go and retire and take your bucket away and leave us with these two thimble-bearers? You'd have been legislatin' and sponsorin' and shepherdin' while these two were still searching for the men's room door in the capitol building.

Sorry. Just sayin'. But no use cryin' over spilt milk; we've got to send one of these two inexperienced young men to Harrisburg to fight for Erie County. And it's probably not as bad as I've made it seem.

People always say that the legislature is no place for on-the-job training; hogwash, I say. There's no other way to get that training, and everyone from Abraham Lincoln to John F. Kennedy were once cross-legged and desperate, frantically searching for that men's room door. However, after a few years in the rock-tumbler that is the Pennsylvania State House of Representatives, Bizzarro will one day become as smooth and polished a speaker as Owen; likewise, Owen one day will comprehend the needs of his constituents the way Bizzarro does.

So what does this all mean?

I've been watching this race since last winter, and from what I gather, it's been more of a coronation than a campaign. The way I see it, Owen's been an afterthought the entire time.

What I think this means is that we've got an even tighter race than we had before. The race is winnable for whichever candidate plays his cards right, and there are a few more minor debates yet to take place, so there's still plenty of time for redemption on all accounts. And that's good for everyone – a competitive race means your vote, your volunteer effort, and your dollars all matter much more than usual.

So, who's the best man for the job? Who's going to find the men's room door first? Be sure to tune in to WICU on Wednesday, Oct. 17 at 7 p.m. to watch these two square off in the Erie Reader 2012 Downtown Debate Series. Then, make your choice. Then, volunteer. Then, donate. And, most importantly, vote on Tuesday, Nov. 6; one of these two men is going to lead us from the days of malaise back to the Fat Old Days, and who that person is depends heavily on what you do in the next few weeks.