It's the end of the world as we know it-- and Cory Vaillancourt feels fine.

by Cory Vaillancourt
View ProfileFacebookTwitterGoogle+RSS Feed
May 18, 2011 at 12:00 AM 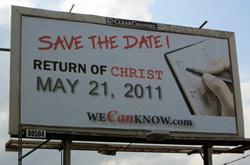 Ladies and gentlemen, I want to thank you all for reading the Erie Reader, and also for reading "Up Front." It's been a pleasure and an honor to share my opinions with you, and I hope that one day we shall all meet again beyond the great veil, basking in a shining light that never ends. It's been one hell of a run, and I've packed a lot of living into the short 36 years I've been allowed to exist on this planet. I have no regrets. I am quitting my job, selling all of my worldly possessions, maxing out all my credit cards, and going on an epic bender, starting right this moment. I'll probably hit Vegas, Savannah, Prague, then Amsterdam before I head back to Erie, in case any of you, my friends, would like to join me in some last minute revelry; for as you may or may not know, the world is scheduled to end just three days after the publication of this issue, May 21, and as I suspect that many of us will not be among the chosen 144,000 who are to ascend on that day, I'm going out raging like the love child of Charlie Sheen and Amy Winehouse.

Now I'm sure some of you will want to know how I arrived at the assumption that we are in the end days. Sure, there is evidence all around -Justin Bieber, for example- but I certainly did not arrive at this conclusion on my own. It all started one sunny Friday a few weeks ago when my editor, Ben Speggen, mysteriously asked me to meet him downtown. He said he had a package for me but wouldn't tell me what it was. Sounded a bit shady to me. Sure enough, when I met him at Starbucks, I nervously eyed a large manila envelope. Someone had dropped this off to one of our editors-in-chief, who passed it on to Ben, who passed it on to me, proving once again that shit does indeed flow downhill.

When I opened it, I discovered it was a thick packet of slick marketing materials, better than many Fortune-500 companies produce. Fliers, business cards, postcards, stickers, bookmarks, DVDs, pamphlets, treatises- you may have even seen their billboards around town; last count there were four- all trumpeting a particularly unique brand of prophecy proving that the last day of the world will  be May 21.

Actually, that's not completely true – May 21 is not the last day of the world, just the first day of five straight months of judgment. That's right, judgment day will last five horrible months, culminating in the end of all creation. I'm assuming that the particular brand of raucous debauchery many of us enjoy will be discouraged during this time, so that makes May 20 our mother-of-all New Years' Eves.

If you think this prophecy is built on a shaky logical chain of arbitrary mathematics and generalized, unsubstantiated conjecture, you're wrong. The work of Harold Camping—mathematician, biblical scholar, broadcaster— is, if nothing else, extensive. He has authored dozens of publications with titles like "WARNING! Judgment Day!" and "Gay Pride: Planned by God as a Sign of the End." Never mind the fact that he doesn't have the best track record with his predictions (he originally predicted this event would take place in 1994); I believe he's on to something this time. He owns several low-power television stations in the New York City area and has hosted a Christian call-in show on the Family Radio network since 1961, so how can he be wrong?

Now, I know religion can be a touchy subject among some, and I don't begrudge anyone their right to believe what they want to believe, no matter how wrong-headed and stupid it may be. So if you're one of those people, the people who don't believe this is going to happen, well, that's just hunky dory with me. But, I beg you, for your own salvation, please take a look at his website, www.2011JudgmentDay.com. There, you can see for yourself that this judgment day business is just as simple as this:

Noah's biblical flood occurred on May 21, 4990 B.C., and somewhere in the bible it says that "one day is with the Lord as a thousand years." Therefore, since the week has seven days (equaling seven thousand years), we add 7000 to 4990 B.C., and you get 2011 (observant readers will note that here was no biblical year zero). Sounds completely logical to me.

Before we go, I will admit, concerned friends and family have asked me many questions about my beliefs, such as "do you have any proof? Do you have a backup plan? Do you have a brain hemorrhage?" The answers are, no, yes, and no-- I do have a backup plan. If this doesn't happen as predicted, I'll just wait around until the Mayans kill us all on December 21, 2012. I still have a fully-stocked underground bunker leftover from that whole Y2K thing.

I want to know what you think of this whole situation. Are you quitting your job? Selling your stuff? Carrying on as if nothing will happen? Or are you one of the chosen ones? In any case, I propose we hold an end-of-the-world-as-we-know-it party on Friday night, May 20th   at some local establishment, preferably one that allows smoking and has REM on the jukebox. Drop me a line in the comments section and let me know where you'll be on the night of the 20th, and we'll ride this sucker out like Slim Whitman rides the bomb in "Dr. Strangelove." If I see you out somewhere, I'll buy you a drink with the credit cards I don't ever plan on paying down. I was drinking a lot of Fracktinis, but lately I've been drinking this new drink called a bin Laden – two shots and a splash of water.

may 21end of the worldapocalypse