by Tracy Geibel
View ProfileFacebookTwitterRSS Feed
June 8, 2016 at 9:15 AM 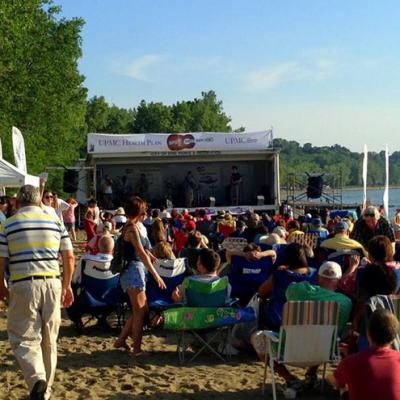 Erie residents and vacationers are welcome to attend any of the weekly Wednesday concerts. With the backdrop of an Erie sunset, the audience can enjoy the best regional music for free.

From June 8 to July 13, Erie residents and vacationers are welcome to attend any of the weekly Wednesday concerts. With the backdrop of an Erie sunset, the audience can enjoy the best regional music for free.

Driftwood will perform June 8 with Matt Texter. Other performances throughout the summer include Sirsy, Big Mean Sound Machine, and Dangermuffin.

From Binghamton, New York, Driftwood describes itself as an Americana and roots band with a "rock n' roll soul and a folk art mind." They've become known for their upbeat performances that include violin, banjo, acoustic guitar, and upright bass.

"We try to push the boundaries and limits of the instruments," said violinist, Claire Byrne.

While Binghamton might not come to mind when thinking of music, bands like Old Crow Medicine Show, The Horseflies, and The Highwoods String Band are from this area. Driftwood members call them a "huge influence."

An Erie native, Texter considers himself an Americana and roots music troubadour. He cites his long family ancestry of farmers, steel workers, and preachers as the reason he loves this type of music, which he's grown up listening to. He recalls singing upbeat, traditional songs in church when he was young.

When performing, Texter tries to get the audience relaxed; he has a carefree, summer vibe. His most recent album is "Live As Usual" with Jim Zahniser. Texter's influences include Johnny Cash and Bob Dylan.

Sirsy and Six Year Stretch will perform the following week, June 15. The Boston Globe called Sirsy the "Little band" with "big sound." Sirsy brings its indie rock sound to over 200 shows per year and has been a special guest for Grace Potter and the Nocturnals, Maroon 5, Train, and others. Six Year Stretch, a band made of three brothers, was named the 2015 REMA Alternative Band of the Year and the 2015 Erie Reader's Best Up-and-Coming Band.

"The entertainment has really stepped up a notch from previous years," said Presque Isle Partnership talent buyer, Ryan Bartosek. "[And] some changes have been made to make it feel like more of a festival-type atmosphere."

There will be face painting, corn hole, and hula hoop lessons at every concert. Ice cream and kettle corn, along with other food and beverages, will be available. Raffle tickets can be purchased for chances to win prizes like gas cards and local restaurant certificates.

In order to make the beach a more accessible venue, the stage will be placed east of its previous location to a wider, more level area, and newly purchased Rec Path walkways will allow wheelchairs to easily roll across the sand. Additionally, a section of Old Lake Road will blocked to protect pedestrians. – Tracy Geibel