Birds have adapted to city life in many ways, they still face risks living around humans. 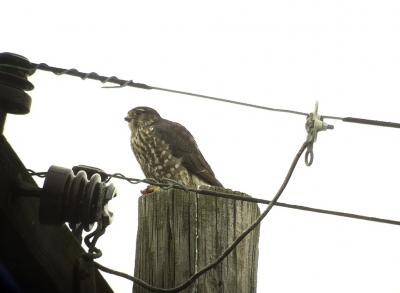 While birds have adapted to city life in many ways, they still face risks living around humans. One of the biggest risks is reflective glass windows. Large panes that mirror the sky or nearby trees fool birds into thinking they can fly "there." Instead they hit hard glass.

Thankfully, Erie does not have many tall glass-filled buildings, but even larger windows in smaller buildings and homes can be deadly. Many homeowners think it's just a bird or two a year, but according to the American Bird Conservancy, up to a billion birds die in collisions with glass each year in the United States.

Another threat is the presence of cats (whether owned or feral) in the natural environment where they are considered a non-native invasive species, though many groups such as Alley Cat Allies disagree with that label. The evidence works against the pro-cat arguments. Research and tracking over the past two decade have led scientists to learn that cats have contributed to the extinction of 33 bird species world wide. In the United States alone, outdoor cats kill approximately 2.4 billion birds every year according to "The State of the Birds" report conducted by the U.S. Department of Interior in 2014.

by Mary Birdsong2/28/2018, 1:15 PM
The city is teeming with avian life
birdscityglasswindowscats