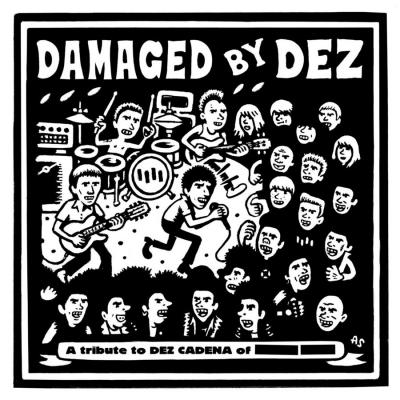 Damaged By Dez is a tribute record to singer Dez Cadena of Black Flag. Featured are six songs Cadena either sang, recorded, or wrote right before singer Henry Rollins ultimately joined the band. Local Erie thrashers Maniacal Device rip through a Hamm's-fueled rendition of "Six Pack'," with beer-soaked vocals over razor-tight guitars and a charging rhythm section that makes you want to see how many cold ones you can pound before the song is over. The Jesse Blankenship Band cover of the break-up song "Jealous Again" shines as a country-punk tune while fellow Columbusites Mummula give us a horror-punk version of "Gimmie Gimmie Gimmie." Buffalo's Pure Heel pull off "Damaged I," a song that utilizes Black Flag's abrasive start/stop technique, complete with feedback and vocal taunting. Vieja Estirpe from Puerto Rico does a street punk version of "Rise Above," complete with gang vocals. Rounding out this tribute is Betty Machete and the Angry Cougars (also from Columbus) with "American Waste," a frantic thrash punk take on a Black Flag classic. Stocked with locals and regular Erie visitors, this is a must-have for any Black Flag collector.

for more info and to order, go to Maniacal Device's Bandcamp page.