The Friends of Mercyhurst College 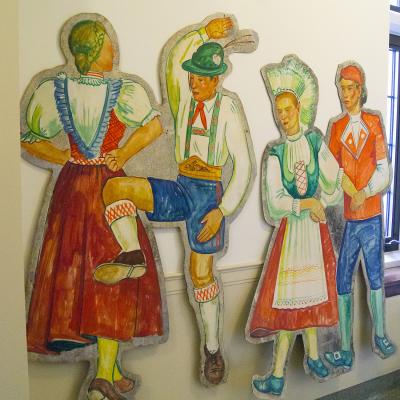 This "Friends of Mercyhurst College Exhibition" is the sixth annual and is arguably the best of these shows to date. This exhibition adds to, and highlights, the university's permanent collection which now totals over 200 works.

However, it would be wrong to say that there was no permanent collection before these shows.

I remember some years ago nearly falling over when I passed an office where I happened to spy "Bust of Diana" by Jean Alexandre Joseph Falguière. Another casting of this bronze is in the collection of the Minneapolis Institute of Arts, so I stumbled into the office to gaze at this old friend from my Docent days, much to the consternation of the employee who could not understand why anyone would want to come into her office just to see some old 19th century French masterpiece stuck in the corner.

In the Mercyhurst Permanent Collection one can see the progression of Roman Catholic art history, from the copy of the Orthodox icon of "The Theotokos of the Passion," which Catholics insist on calling "Perpetual Help," just outside the "Lady Chapel" of Christ the King Chapel; to the faithful copy of Andrea del Sarto's "Madonna of the Harpies" (original c.1517) in Old Main. There was an exquisite example of an early 20th century Madonna and Child, which simply disappeared, presumably out the door it hung near, never to be seen again. There is still the Pre-Vatican II ambiance of Christ the King Chapel (c. 1933 though unfortunately further modified in recent years); and this tour rounds things off with the completely iconoclastic Prince of Peace Chapel featuring the art of Joseph Pizzat.

Mercyhurst's Old Main boasted several murals, a couple of which survive. The wonderful period piece, in style and theme, done by a student in the 1940s illustrating all the professions opened to a young lady graduating from the then all girl college, has since been whitewashed over.

Clearly this collection was being neglected.

Enter Mary Gamble, wife of Dr. Thomas Gamble who became President of Mercyhurst College March 1, 2006. Mrs. Gamble immediately rose to the position of Friend of the Arts, and began work to expand the collection, though not without some controversy.

An exhibition of religious art was criticized as too liberal and insensitive to some local religious communities.

Another exhibition sent a panic through the hallways when a nude figure was placed there in front of God and everybody. Never mind that the nude has been with us since the Paleolithic period, that Mercyhurst has never censored works because of anatomy anyway, or the fact that students have often hired themselves out as artists models to be able to afford going home for Christmas break with a couple of extra presents. This incident left some of us shaking our heads and muttering.

But the art community has done a lot to educate the local population, and so has Mrs. Gamble. She has remained sensitive to such hot issues in the art community as organizations requesting art expecting the artist to give up their work without getting something of real value in return. Besides the opening reception, which is lavish as these things go, informants tell me that donors are treated to a spectacular thank you dinner hosted by the Hospitality students, which gives these students a valuable educational experience as well.

As Curator of this exhibition, Mrs. Gamble has chosen 50 living breathing local artists for this year's exhibition with 36 deciding, rather than being compelled, to donate to the permanent collection.

One on loan is "Still Life with Orchid" by Margaret Turner Hicks (1923-2006) who is best known for her miniatures created using very fine brushes and magnifying glasses. Though prominent in the composition, the orchid actually acts as an arch to encompass two of the three clocks present in the painting. The pink of the orchid is held in check by the subtle use of the same color in the background wall.

Some are special donations, such as Dan Burke's watercolor, "Boxes and Mirrors," a study of brightly colored rectangles within rectangles, and an interesting look into an earlier Burke. It is donated in memory of Peggy Krider, the great lady of Erie art, a truly classy gesture. Dan Burke is highlighted as this year's "alcove artist" where some of his newer dark bird motifs seem to have been trapped and confined while others have broken astatically free.

Donated by collectors is a set of 18 Joseph Plavcan dancers originally created for Rainbow Gardens at Waldameer Park in the early 1950s. Plavcan (1908-1981) is historically one of Erie's most important painters and certainly the most beloved. His work anticipated the later psychedelic uses of color. The Dancers may strike the viewer as strangely sketchy, unfinished and with rather odd proportions as they were not meant to be seen hanging on the wall but upon the ceiling. Hopefully some solution can be found in the future so that these pieces can be seen to proper advantage.

There is too much that is noteworthy to speak of here. But the pieces that stood out as a revelation to me were two by Ellen Burke Fleckenstein. These have a low horizon line and a suggestion of sun behind the clouds. But the color is so juicy and its application so sensual that they can be enjoyed just as composition without needing to see any abstracted landscape in them.

At the opening I did hear some artists express concerns, which should be addressed by Mercyhurst in the future. In light of the Hassam scandal, what does "permanent collection" actually mean? Will the pieces, as the artists intend, be kept and conserved in perpetuity? And though the Academic Engagement Center will allow for the display of some of the work, can Diana's fate of inaccessible obscurity be avoided? Can security avoid a repeat of the missing Madonna? And can the same artists be repeatedly asked for their work without "the well running dry" or the walls being used up?

But these issues are for another day for now one should go to Mercyhurst's Old Main to enjoy this show, which can be seen on weekdays 9 a.m. to 6 p.m. in Old Main while school is in session through March 30, 2012. For group tours call 824.2311.